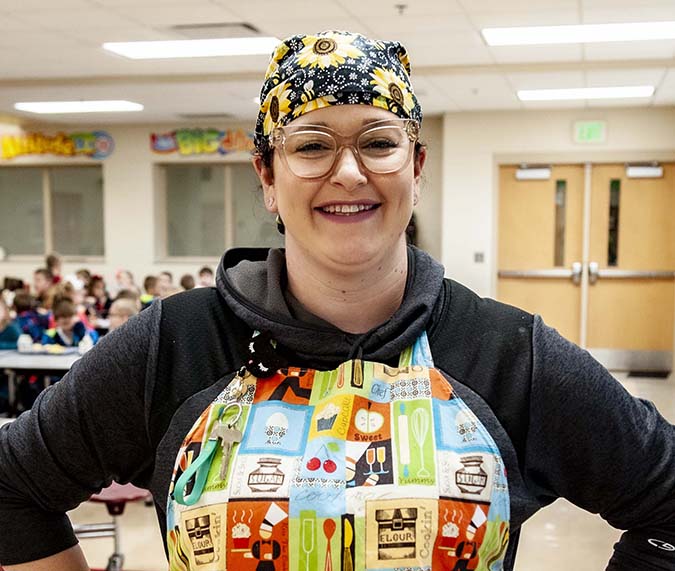 Spencer County Online continues a new series. All 11 county schools will be featured on a rotating basis. Our hope is to share a positive event or person, honing in on the great things happening in education, especially because education is a powerful and sometimes controversial topic in today’s society. Some of the schools do not always receive a lot of media coverage and this is a chance to shine a light and show off the great things going on within their walls. Spencer County Online would like to give you a virtual tour through the doors of Spencer County schools to see what your kids are up to and what they are learning. We really hope you enjoy this series, so with that, let the second highlight begin and bon appetit!

First, if you have not read our first highlight about Heritage Hills’ Todd Wilkerson but you would like to, here is the link https://spencercountyonline.com/2020/01/20/highlight-series-featuring-heritage-hills-high-schools-todd-wilkerson-and-s2c/

Principal Adams mentioned that Maggie has come in and completely revamped their entire menu and the way they cook and serve school lunches. Before we get into what all Maggie does, here’s a little bit of an introduction.

Maggie was born and raised in Newburgh, and graduated from Castle High School. After high school Maggie attended and graduated from the culinary arts program at Sullivan University in Louisville, Kentucky. She worked many places throughout her college days, gaining valuable experience where she could, including working as a sous chef at a winery.

-For those who are unfamiliar with culinary lingo like myself, I’ll save you the Google trip, a sous chef is someone who is second in command in the kitchen, a seat below the executive chef.

Maggie remembers her mom cooking all the time as a kid. Her mom never bought frozen food, cooking is in her blood.

Maggie knew from a young age she wanted to attend culinary school, and has always felt that food and nutrition are so important. Cooking in her home is a norm as one could expect from a chef. Maggie has four children, ranging from 5 months to 15 years and often cooks international foods for them. After trying those meals out on her children, she will sometimes try to create international meals for the kids at school. Many of them love Chicken on the Beach and taco pie. With those type of meals, it’s always a hit or a miss. After all children are children, and if they could consume mac and cheese and chicken nuggets for every meal of their life they would. (Author’s Note: I laugh to myself at this thought, because I was definitely that kid).

Maggie then moved back home after graduation and took on the role of Food and Nutrition Services Manager at Deaconess. She was asst. manager at the main hospital and head manager at the downtown and Cross Pointe locations. She began working for Luce over the summer of 2019 but was pregnant and didn’t officially start work until September.

But when she started she was in.

Some things that Maggie did to change up the menu and make it healthier was to use less processed foods, getting away from canned fruits and veggies and introducing the students to fresh fruits and vegetables.

This new way of preparing school lunch still falls within budget. Some foods the kids have to get used to, but others the children really love. And of course they really can’t get enough of the fresh fruit.

When she finds something the kids like the staff will usually try to repeat that meal on occasion, while also always trying to introduce new foods to them.

Authors Note: If you have been in or worked in the school system within the past several years you know that school meals are not what they used to be. I graduated from Heritage Hills in 2016, and somewhere around middle school, I remember lunches completely changing. I remember being frustrated that some days for lunch all I would get to eat would be a piece of whole grain pizza and three orange slices with a milk. Though I could have gone home after cross country practice to find something in the fridge to eat, that’s not the case for all students. For many children, not just in Spencer County, but all over the U.S. rely heavily on school meals to fill their stomachs, because for some, they can’t just go home and open a fridge full of food. I’m not sure about you, but a piece of pizza and three orange slices wasn’t enough to fill me up. I didn’t understand that the ones who cook school lunch must also report to someone. They have budgets, guidelines and rules they have to follow. I was unaware this was not the lunch staff’s doing, they were only following rules. For the first time, I was able to ask first hand what went on within school kitchen walls and when this new way of preparing meals began.

Maggie shared that the idea was in the right place, “we need to be serving our kids better meals,” she says, but with all the new restrictions, they are limited on the amount of sugar, sodium, calories, etc. they can serve in a week. So if they make a certain meal with a higher sodium count, that takes away from the sodium count for another day. There are some famous chefs who were aware of this change in nutrition in schools, and took it upon themselves to create recipes for school chefs to use with the supplies they are offered. Maggie says that “making things from scratch can be harder but it’s also better.” By making things from scratch they are able to alter the recipes, to make them not only healthier, but also a little tastier. Maggie mentions how it’s hard to get kids to eat whole grain foods, they don’t always look the best, and don’t always taste the best. So if whole grain is what they want to use, they make it themselves.

There are three staff members in the Luce kitchen — Maggie Cudill, Shelley Poole and Anna Green. Shelley began around the same time Maggie did, but Anna has been with Luce for about 15 years. Shelley says, “It was intimidating at first hearing that a professional chef was coming in.” Though Anna agrees she said that “Maggie came in and fit us well.” When Maggie changed the menu, Shelley and Anna were a little scared, but what made the transition much easier is that Maggie would never give them any task she wouldn’t be willing to do herself. If she’s giving them something to do she is getting right in there with them.

They give the kids three different fruits to choose from, along with a few veggies. Maggie says, “I really just want to expand their taste buds.” Along with the regular menu, they also often offer a salad bar for those who don’t bring their lunch but don’t want what’s being offered on the regular menu.

In a day the staff serves anywhere from 180 to 220 kids, usually just dependent on what is being served, and while serving I witnessed Maggie continue to build personal connections with each and every child that went through her lunch line. She could tell me the name of each child, noticed when a kid wasn’t there, and not just because his or her name popped up on the screen as she rang up each child’s tray. She would acknowledge each child before taking their tray order.

Authors Note: While observing and interviewing Maggie, for lunch they were making pigs in a blanket from scratch. I got to see how they make, roll, and cut the dough from hand. I then had the honor of tasting the final product, and might I say, those little piggies were good. I had the pleasure of sitting and eating the product of their labor with them. They kept asking me if I was learning anything and really I learned much more than they know, including how to make homemade pigs in a blanket. To put it into words took quite some time because of the newly found appreciation and respect I obtained via this interview. I have very fond memories of the ladies who served meals to me through my school days, many who remember me to this day 17+ years later. I may not remember all of their names, but I remember their kindness, and compassion, for myself and those around me. No matter what was going on in their day they always greeted me with a smile, remembered my name, noticed my brand new light up Sketchers, notice I had gotten a haircut, recognized if I wasn’t having a good day. They genuinely cared about my well-being. Yes, Maggie is a professional and from what I observed, she is very good at what she does. She is also a mom, a daughter, co-worker, friend, and role model to each kid she encounters.

Each role in a school is vital to a child’s education whether it be teachers, principals, janitors, maintenance men and women, bus drivers, teacher assistants, to the kitchen staff. None would be able to do their job without the other.

Thank you Luce Elementary, for embracing change even in the smallest of places, because even the smallest of things can make the biggest of differences. Thank you Maggie, for being willing to take the extra step to make sure our kids are not only tasting new things and expanding their pallets, but making sure they have what they need, and are able to leave with full tummies. Thank you to those who serve in school kitchens, you take the blunt force when guidelines are changed and respond to such which aren’t always pleasant. The job you do is far from easy. Kids rely on you to make sure they’re getting not only the right type, but the right amount of food they need to get them through the day, and in some unfortunate but very real cases through the night. I definitely believe the work that Maggie is doing was well worth the recognition from Luce, and I was very honored to get to know Maggie and her love for cooking, serving, and caring for young ones in her community. So, once again thank you Maggie, for your dedication to not only giving our kids healthier meals, but for putting a little love in every piece of dough.