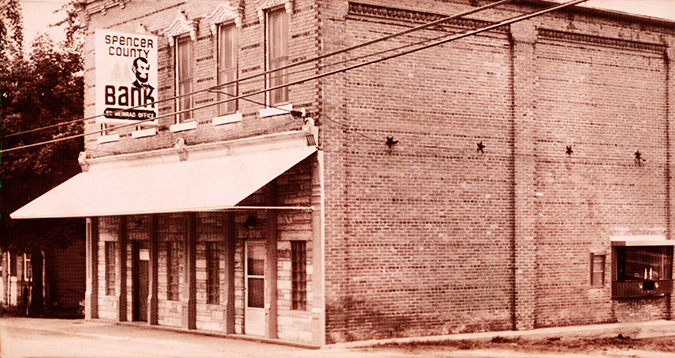 Spencer County Bank, with branches in Santa Claus, Richland, will hold open house Saturday for the third branch which has been opened in St. Meinrad.

Originally Known as the Lake State Bank, it was organized at Richland on September 6, 1907 with a capital stock of $25,000. It was then principally serving the Richland and Hatfeild communities.

In January of 1967, new stockholders were added and Ollie Deeg was named chairman of the board; W. A. Koch as president, Merle J Kendall as Executive Vice-President; F. C. Ferguson as vice president; A. W. Hodges as cashier, C. H. Waters and J. W. Kincaid as directors and N. C. Smith assistant cashier. In November of the same year at the bank listed total resources of $2,727,966.31.

At a hearing by the Indiana Department of Financial Institutions on June 21, 1967, the Lake State Bank was granted approval to build a branch in Santa Claus, and proceedings were started at once to change the name of the bank to the Spencer County Bank.

This new branch at Santa Claus was completed in early 1969 and their grand opening was held on June 1, of that year.

By late 1970, the Spencer County Bank announced that they had received permission to open another branch in St. Meinrad.

The building selected is owned by the St. Meinrad Development Corporation, who purchased the property and remodeling was begun as soon as the announcement was made that Spencer County Bank would open a branch there.

Facing north on US 460 in the heart of St. Meinrad, the bank entrance is on the northeast corner, with the office of the Schatz Insurance Agency on the North West Corner The lobby was redecorated and remodeled with paneling. A new vault was installed in the building, plus an office and several storage areas.

On the west side of the building a new drive-in window was installed and an ample parking area provided for off-street parking of bank customers. About 1,000 square feet of floor space is being used by the bank which opened on May 1.