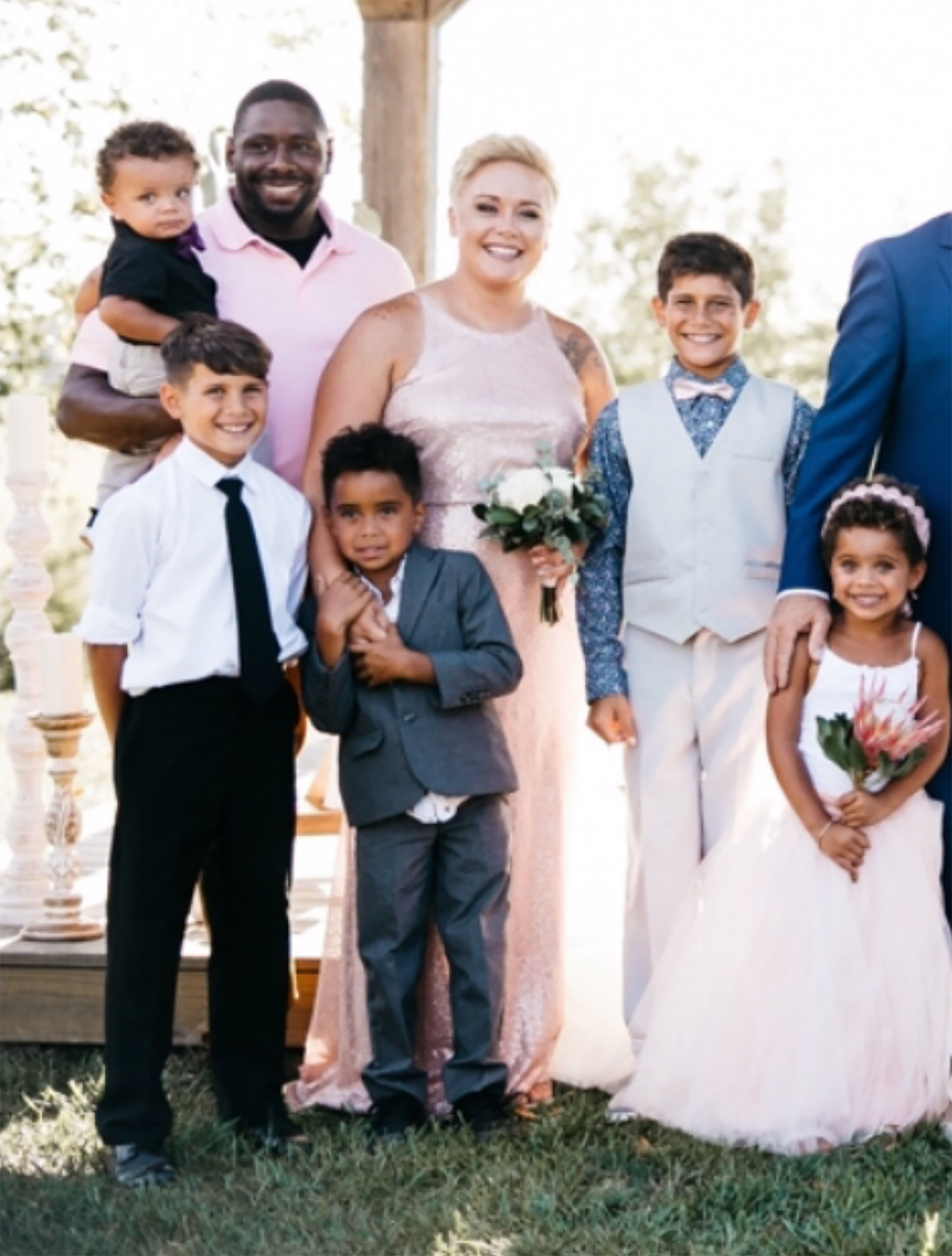 Many in the Santa Claus community already known the Boyds. For those who don’t, they are a beautiful family of seven. Claire is known by many from her job at Lori’s Day Spa in Dale and for her and Richard’s work in coaching youth sports. Along with coaching, Richard also runs 5 Star Recruit Sports Performance. Claire was born and raised in Santa Claus, while Richard is from Louisville, KY. They have been together for seven years, married for six, and they are raising five kids together, Kane, 12, Drayk, 10, Trace, 5, Quinn, 4, and Zade, 1.

This family is multi-racial — one of the many things that makes this family unique. Claire is white, Richard is black, Kane and Drayk are Puerto Rican, and Trace, Quinn and Zade are black and white mixed. As beautiful as it is for a family to be of many races and to be blessed with so much cultural history to celebrate, this isn’t what defines the Boyd family. What defines the Boyd family is the love, kindness, acceptance and so much more they give to those around them. They have a huge passion for the community’s youth; along with coaching youth sports they have participated in Choo (during which children are fed breakfast before church) at Santa Claus United Methodist for the past two years. Richard helped start sports programs that take place at Yellig Park, and coming this fall, August 9, 5 Star Recruit Sports Performance will be putting together a Youth Sports Combine.

Even those who live under a rock know what’s happening in the world right now. So much hate and hostility, rioting and looting — those negative occurrences have tarnished the reputation of what was meant to be a beautiful movement towards bringing human rights to all races, many whose rights have never been fully acknowledged.

Spencer County, along with much of southern Indiana, is predominantly white. With that, many will not come across a person of a different ethnicity or culture until they’re taken outside the area and it can often times be quite a culture shock. Spencer County has a significant Hispanic community, but even exposure to a single culture that’s different from your own isn’t always enough. While most have TV and the internet at the tips of their fingers, it’s just not the same as it would be to meet and mingle in person.

When the Spencer County Leader and Spencer County Online reached out to the Boyds, they were completely on board with opening up and sharing their thoughts, experiences and hardships with not only what is going on today, but also throughout their lives, in hopes of educating those who don’t normally have the opportunity to learn about what people of different ethnicities and cultures go through in their day-to-day lives.

While the Boyd family has found much support in their small community, they’ve still experienced things no person should ever experience for something like the color of their skin. Richard recalls that when he first moved here, he went into an establishment and the woman at the counter saw him and immediately hurried to the back, a man came out in her place to help him. The woman didn’t return to the front until Richard exited the building. Sitting in the bleachers of an away football game to watch their nephew play for the Patriots, they overheard a conversation loud and clear referring to their nephew as an “it” and making racist comments that no one would want to hear being said about anyone they love, much less know.

Their nephew also experienced racism on the football field at an away game, being called hateful racial names and slurs. Though his teammates had his back, Richard says the fact the child from the other team was raised to even think its okay to have those thoughts much less say them is disheartening. Richard also talks about how he has been profiled by police a minimum of 10 times.

Richard remembers his first traumatic experience when he was 16 in the car with his friends, all of whom who were black. The officer told Richard his vehicle matched the description of a car that was involved in a crime, and he and his friends were asked to exit the vehicle. The officer would not let them leave, Richard says, until Richard’s father was called. When his father arrived at the gas station, he walked toward the kids and officer; the officer drew his gun and aimed it at Richard’s father, who was unarmed and in no case a threat to anyone at the scene. Richard would go on to experience similar occurrences in his young adult life. The Boyds believe that while, the police are necessary and should not be disbanded, the system itself needs a major change.

Claire says that as a hair-dresser, she had to attend more schooling and training than those who do so to become a police officer.

It can often be hard to relate to someone who is different from you, but the best way to try and understand something you will never experience is to put yourself in their situation. Imagine what it would be like to be treated the way many minorities are simply because they are different. Think if it were you being denied something, or treated less than human or worst case, losing your or someone you love’s life for simply walking down the street eating a pack of skittles.

The phrase black lives matter has been everywhere, and many seem to be on the fence about it. When one says black lives matter, some tend to respond with “no, all lives matter”. While those who claim the latter aren’t wrong by any means, saying black lives matter isn’t saying that all lives don’t, it’s saying that they also matter and would like others to believe their lives are just as important. A good way to think about this phrase would be to imagine a neighborhood where one of the houses is on fire. In response everyone goes to help put the fire out. In the midst of that house fire, unless your house is right next to it, one is most likely not going to think “well what about my house?” It’s not that your house isn’t important, it’s just not the one that’s currently on fire. Or if you see someone posting on social media asking people to pray to end Leukemia because his/her mother is a sufferer of the disease, one will most likely not respond on that post with all cancers are bad and should end. While it’s quite obvious that all cancers are bad, we are sympathetic to this person and their feelings towards Leukemia, and will let them know they are in our thoughts and prayers, and some may even donate to causes to help end said cancer.

It’s the same with black lives matter, while the name makes it seem exclusive, the movement is more inclusive than any other. When thinking about this movement, it’s important not to associate those who are rioting and being violent, not all of those people aren’t a part of the movement for the right reasons.

We as humans can come together for our fellow human brothers and sisters, and once we are all on board, real change can begin.

One thought on “Diversity over Adversity: Meet the Boyds”