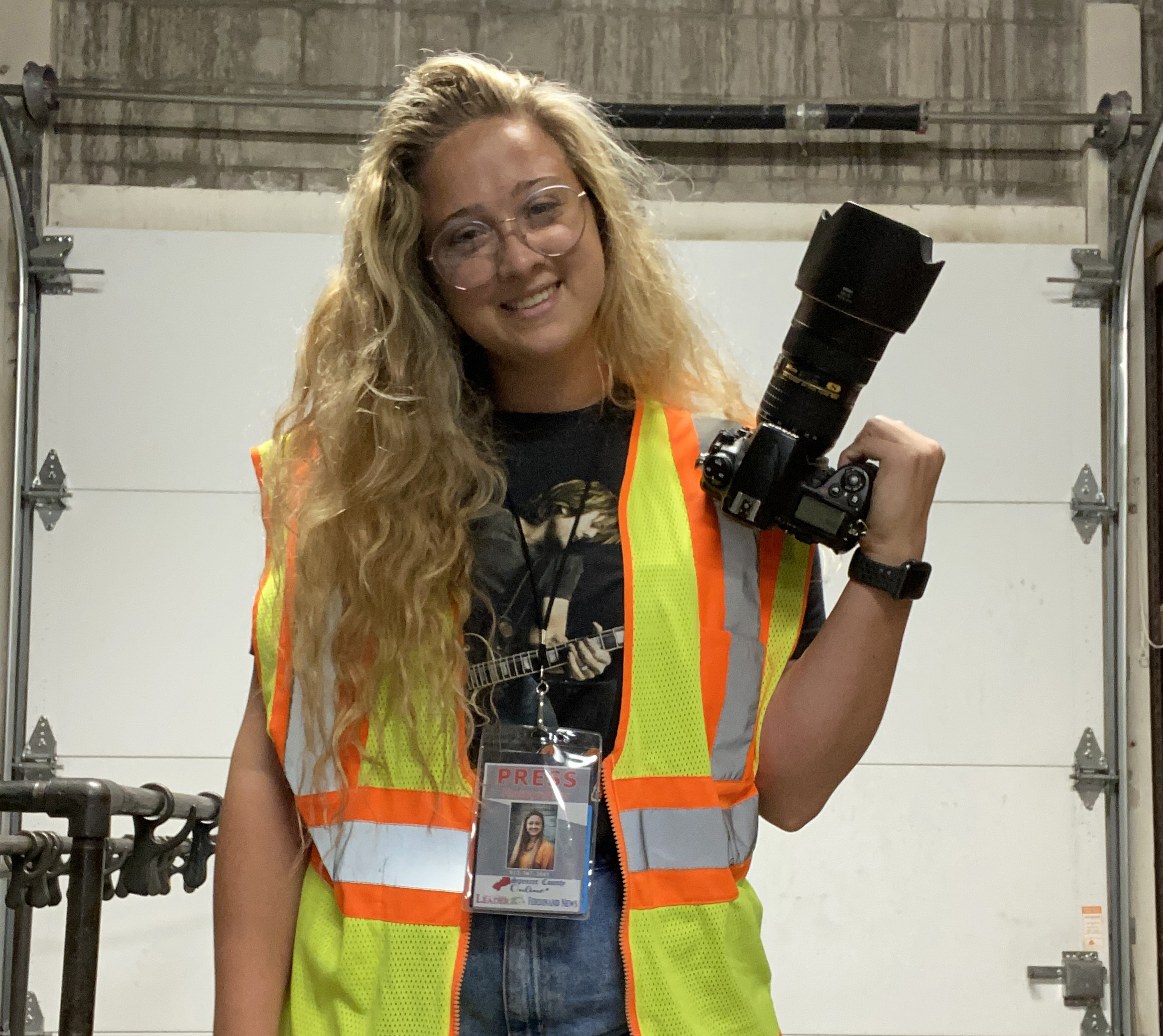 It was supposed to be a typical Monday. Along with being the website manager for Spencer County Online I am the lead photographer for the Spencer County Leader and Ferdinand News. Sometimes that means I have to photograph a scene, respectfully, of our local service men and women at work doing things that are difficult.

On a recent Monday, while driving to work, I came upon a wreck on 162. The road was completely blocked due to a truck and semi collision. Luckily no one involved was seriously injured.

For anyone who knows me knows “shy” usually isn’t an accurate word to describe me. But I tend to become bashful when attending events as media for the fear of overstepping, upsetting someone or being disrespectful.

After timidly asking permission to get closer to the scene and taking pictures, I head to work fully assuming that will be the most exciting thing to happen for the rest of the day.

COVID-19 really put a halt on things for me to take pictures of so for the past several months I’ve been aimlessly searching for things to photograph or just working around the office to keep me somewhat busy until the next task appears.

I arrive to the office, set my camera down and plugged in my memory card to begin looking through my photos from the accident. My publisher, Kathy Tretter received a call and the mood in the room instantly changed, there was a sense of excitement, curiosity and urgency. Kathy tells me to gather my camera, put on all of my credentials and head to Lincoln Park.

I begin to panic, I have no information of what I’m looking for, will I have to record information, where exactly do I go at Lincoln, is it a person, what’s happening? As I am scurrying out the door Kathy tells me the Vice President of the United States is coming to Lincoln City. When I say my stomach dropped, I began to think of all the reasons I should be the absolute last person to be sent on this assignment.

Mondays are paper days at the office. This is the day that we put finishing touches on both the Ferdinand News and Spencer County Leader and then send them off to be printed. This is our single most busy day of the week. With it being paper day everyone in the office is tied to their computers and unable to leave. That left me the only available employee to go chase after the second in command of the whole entire United States, I don’t know if I can add anymore descriptive words to put before United States to emphasize the comparison of this mans status to lil’ ole’ 22 year old me who has only been working in media for 11 months. The entire drive I’m thinking I’m in way over my head, has Kathy lost her mind? Surely she’s lost her mind. Has she met me? I’m definitely not cut out for this.

Heading toward the park, if one didn’t know where she was going all she would have to do is follow the trail of police officials stationed around the perimeter leading up to the entrance of the Lincoln Boyhood Memorial. After pulling into the park and asking an official where media was allowed to be I was told to leave the park and media was to not be in attendance. I was also told by one of the officials I could park outside of the perimeter but was shortly told by another official I could not park there and must move.

I drove back into the park and pulled into a parking spot by the Lincoln Memorial Museum. I then dialed Kathy’s number whom I’ve called a minimum of seven times prior frantically trying to figure out what I’m to do. She tells me to go adventuring, do what I can to get a good photo without getting in trouble. This is where things for me started to get very interesting. I begin to make my way down Hanks Hill towards the Living Farm. At the very bottom of the hill are several armed rangers guarding a blockade.

At this point as far as I know I’m in a place where I’m not supposed to be because one of the officials told me the closest I would be allowed was at the top of Hanks Hill. I didn’t want to walk down the hill to be greeted by armed guards and be told to swiftly head back up the hill empty handed with no photos. So, me being who I am, often taking many things literally, Kathy told me to adventure so that’s what I do. I began to make my way into the brush. I was unable to have a clear shot of the hill below from where I was so going into the brush was the only way to get a clear shot.

I began to feel very silly hiding in the bushes while the place is swarming with Secret Service men and women patrolling, and helicopters constantly flying the area. The thought reappears in my mind, has Kathy met me? What if the Secret Service come walking by and see me in the bushes, that would look awfully suspicious. As my family tells me, my middle name is not graceful; and I know there is just no way Hope is going to out secret the Secret Service.

I’m blowing up Kathy’s phone at this moment still not knowing what I’m supposed to do. I get to the bottom of the hill and Kathy requests to talk to the Guards though the phone. While she’s on the phone I am taking pictures of anything and everything.

As I’m wearing out the shutter on my camera six Secret Service members walk up on me. They were so polite and didn’t want to ruin my shots though they were also who I would have loved to get pictures of, but they patiently and politely waited until I finished taking my photos of the area. Then, as they walked by I of course took pictures of them. I expected suits and ties, but they were dressed in khaki hiking pants, long-sleeve button-up shirts and hiking boots. The only thing that gave them away was the not so subtle wires sticking out their ears, which instantly made me aware of their position at the site.

I then left that area after being told I would not be able to go any further. The guards were very friendly and had even been telling me of things I could take pictures of that make a good photo while my boss was on the phone with one of the other guards. Their friendliness definitely calmed my nerves, and again assuring me I would not get arrested as long as I didn’t go where I wasn’t supposed to. I go back to my car and begin to brainstorm, I drive out of the park and troll the perimeter to see where I could and could not get in and where the other media stations were set up. I find some other stations parked at the soccer field and tennis courts, and I wanted to see if I could get any closer or get somewhere they aren’t.

Being that I’m from the area unlike all the other news outlets I know Lincoln City like the back of my hand. I then go back the other way and turn to drive down a couple back roads and arrive at the train tracks by the living farm. Lo and behold the presidential motorcade sits waiting for orders. Six police motorcycles, tons of police cars, and other official government cars are parked along the road.

At this point it is about noon, and I’ve been there since 8:30 a.m. I then sit there for another 2 hours until I finally see two black SUV’s begin to pull out leading several other large SUV’s and other official cars that are part of the motorcade. As I sit there thinking they’re going to turn the other way, they turn towards me and start driving my way.

The entire motorcade pulls around right next to me on the driver’s side and then begin to make their way back into the park to leave. After the motorcade came right next to me I knew I was the only one who got that video footage and the photos of this occurrence. I felt awfully proud of my self for sticking it out and waiting around for 6 hours just to get a 5 minute glimpse of the motorcade pulling up inches away from my car.

This is something I don’t think I will ever forget. I may not have got a clear picture of Vice President Pence but just knowing I was within inches of someone with such status and importance in our country was quite the rush of adrenalin. No matter what political party one may associate with, no matter the adoration or lack there of one may have for any given politician, there is just something about being in the vicinity of someone that important that I felt was surreal and an experience not many will ever get to say they have had. I can positively say that in the years to come, no matter the new assignments I will be given, the crazy things I may have to attend, this will definitely be on the list of craziest work days of my life.