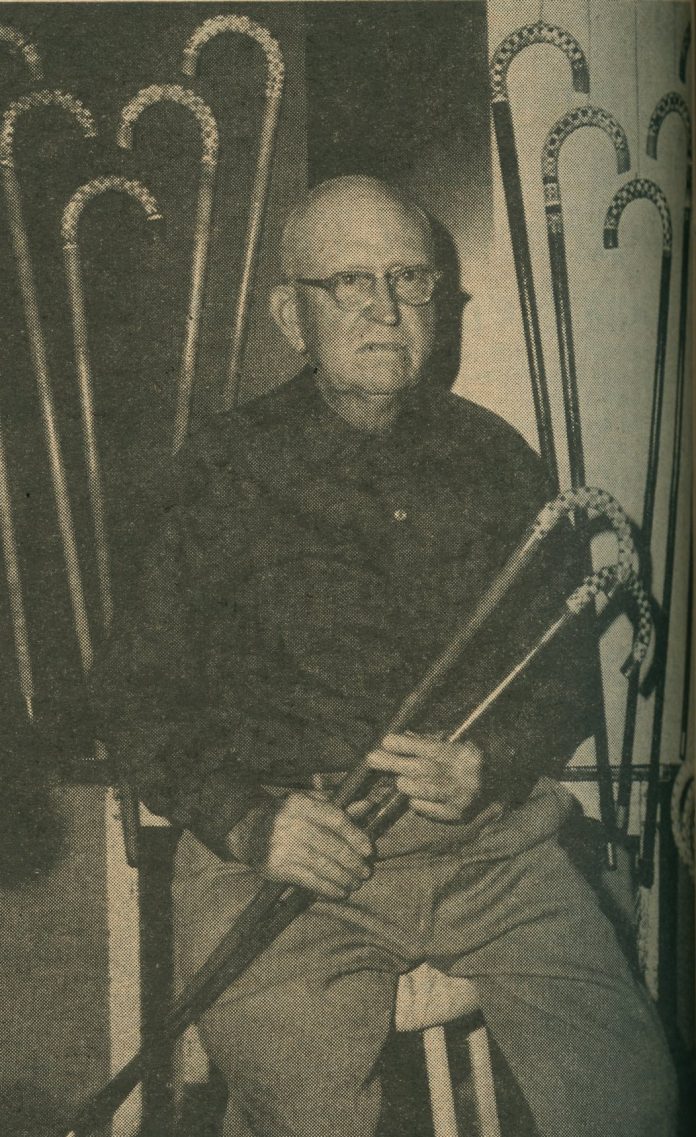 In a small basement workshop in his home a retired lumberman is using his woodworking skill to pursue a creative hobby.

Making canes with inlaid hardwood handles keeps 81-year-old A. J. “Bert” Brown gainfully employed five or six days a week- when he is not fishing, or cultivating flowers and vegetables, or helping his Wie with housework.

The cane drafts are taper turned from wild cherry and black walnut. Handles are made of about 300 pieces of mostly cherry, black walnut, white maple, with a small amount of red cedar or other hardwood. The wood is ripped into strips the right size and angle for 8 or sixteen pieces to form a complete round. Strips are glued and turned, then cut into blocks the right size and angle to fit on the solid aluminum handle.

All glueing is done with moisture resistant glue, which makes a joint stringer than the wood itself.

Blocks are glued and assembled to make different designs and when dry are finished on a handle shaper. After some necessary hand work and sanding, all except a few cherry shafts are finished in natural colors of the wood with a coat of clear seal and three coats of high grade varnish. All canes are rubber tipped.

Bent and the former Florence Painter have been happily married for over 61 years and lived at Medical and Gaines streets in Dale. Before his retirement in 1948, he was manager of Brown Bros. Lumber Company, where he had worked for fifty some years.

He was a Sunday school superintendent at the Dale United Brethren Church for 38 years.

Fifteen years ago, after a severe illness in the hospital, his doctors told him he must retire with a life expectancy of five or ten years in which he could do nothing but ride in a car or go fishing.

About five years ago, when his arthritis made him think it would not be long before he must walk with a cane, he set about making one. The inlaid handle, though tedious and difficult, was satisfactory light work he could do and so absorbing, he soon found himself making extras to give to friends.

The first cane was given to a retired employee who had worked at Brown Bros. for 50 years; the most recent gift was to neighbors who celebrated fiftieth wedding anniversary.

Bert has found many appropriate occasions for giving away canes; to six U.B. ministers who had served at Dale; a neighbor on his 90th birthday; a grandson who was temporarily crippled by a copperhead snakebite; a daughter with a broken leg; a brother-in-law in Idaho; cousins in California, and a real African princess, who was here with a missionary couple. The girl asked for a cane to take to her father, an African chief.

Other canes were given to retired employees, relatives and friends- some of them at Delray Beach, Fla., where Bert and his wife spent eleven happy winters after retiring.

The largest order was from his brother, Frank Brown, for 25 canes. The wood used came from a walnut tree planted by their grandfather Clark 100 years ago, before he went to the Civil War. It grew into a beautiful shade Tre but Grandfather Clark didn’t get back to see it. When it was cut down 40 years later, Frank kept a log and later nailed his shoe last to a large block of it.

Pieces from this black walnut block were used in handles of 25 canes. Other wood used was from black walnut and white maple trees grown from sprouts planted by Frank in his yard in Dale. The special canes were ordered for Frank’s children, grandchildren and great-grandchildren.

The canes are now made in lots of 10 to 15. Continuously improving equipment, material and workmanship, Bert says he can make a better cane in half the time it took two years ago.