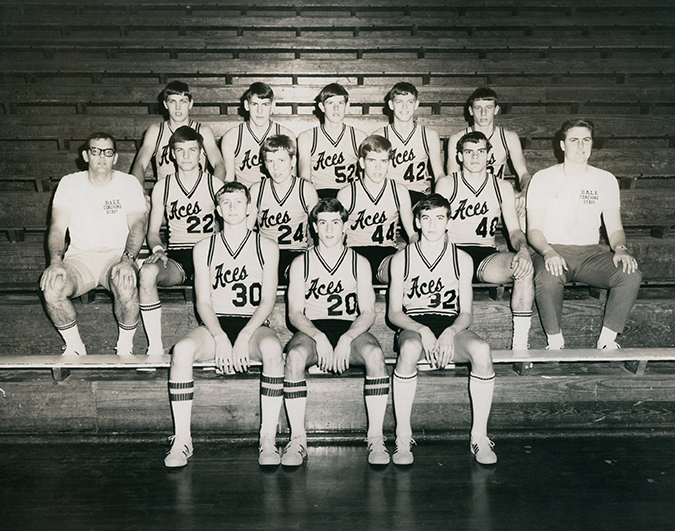 Bernie Burk and his Golden Aces of Dale, will travel to Paradise on Friday nigtht, to open their 1970-71 basketball season against the Castle Knights. This will be the season opener for both teams, and a good opportunity from each.

Although Dale has lost the services of their two op gunners, Rick Graman and Nick Hart, the Aces have seniors Rick Rosbottom 5-9, Bob Hagedorn 5-9, and Tom Lubbeheusen 6-2 returning from last season’s varsity, plus Wayne Hobbs 5-7, Gardner Painter 5-9, both seniors; Rick Hufnagel 6-2, Jay Guth 5-10, both juniors who saw limited action with the varsity last year… PLUS… four of the best sophomore prospects to be found in the area: Larry Wilmes 6-4, Roger Southwood 6-3, Ken Guth 5-10, and Steve Kendall 5-5. These have been standouts in grade school and the freshman teams, and coach Burk will be casting more than a passing glance at them!

In last season’s action, Dale downed Castle twice: In the season opener it was 93-70 and in the Boonville holiday tourney they took them again 65-55. Dale finished the season with a 15-8 record including two high-flyers 107-56 lost to South Spencer and 119-66 loss to Memorial.