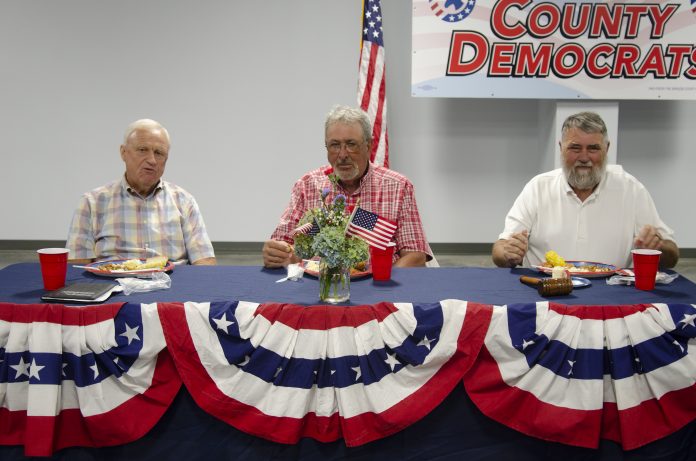 Spencer County Democrats and guests from neighboring counties, gathered at the Youth and Community Center in Chrisney Sunday afternoon for the party’s annual Fish Fry.

Guests included Lauren Ganipini, Executive Director of the Indiana Democrat Party, who explained there are many organizational changes taking place, with a new chairman and vice chair.

“We want to help counties rebuild,” Ganipi explained, “so everyone can work smarter. We are implementing a true, year round organizational structure.”

She said the goal is to make sure elected officials represent the people who elect them. Currently they are working to recruit candidates and then train them.

One issue for which local Democrats object is the proposed reduction in polling sites with the implementation of vote centers. While the vote centers could be beneficial, reducing the number of places to vote to seven could make it difficult for voters to get to the polls.

Eighth District Chair Thomasina Marsili reminded the assembly that one year earlier, not long after the 2020 Fish Fry she lost her father, and while his death was not due to COVID, like many families who lost a family member to the coronavirus the family could not celebrate the lives lost together. She asked for a moment of silence to honor all those who passed away.

“Together we are stronger. Together we can do this. We can gather together, work together, care together, pray together because we are together. This is our time and our hill is not as steep as we once thought it was.”

She spoke of President Joe Biden’s plans to improve infrastructure noting that since Preisdent Eisenhower in 1956 there have been no Republican plans to rebuild, saying places like Spencer County have the workers to build those roads and bridges. According to the plan, the Eighth District will receive $100 million ($8.3 in total million for Spencer County).Marsili introduced Keynote Speaker Kent Yeager, a farmer from Mauckport who serves as the party’s Deputy Chairman for Rural Engagement.

Yeager spoke of the horrific loss of life due to COVID-19 and noted, “We could completely have this thing in the rearview mirror. Who ever thought we’d have a president making personal attacks, sometimes on people who worked for him the week before?”

Then he turned to the present and future, saying what a difference the American Rescue Plan can make, with a very definite focus on rural jobs.

He spoke of the importance of broadband as an infrastructure need, with $250 million coming to Indiana to help with that effort, and designations for both veterans and childcare.

“We need to do something to encourage families. There is an argument whether it’s [childcare] infrastructure but getting a plan in place is critical.”

Yeager mentioned changes the state legislature made to the Teachers Union, affecting how dues are paid.

He also talked about climate change. As a farmer it is something to which he pays close attention. “Look around at the extremely heavy rains. It used to be we’d get one three to four inch rain a year. Now we’re lucky when a rain is not three to four inches.”

All present were encouraged to sign up to help Democrat candidates by going door to door and to assist in any way they can.

As the gathering wound to a close, Spencer County Democratic Party Chairman Steve Rininger explained this would be his last event as chair. He is stepping down in August at which time a new chair will be selected.

“At that time,” Rininger told the crowd, “I will give my gavel to the new chairperson.”