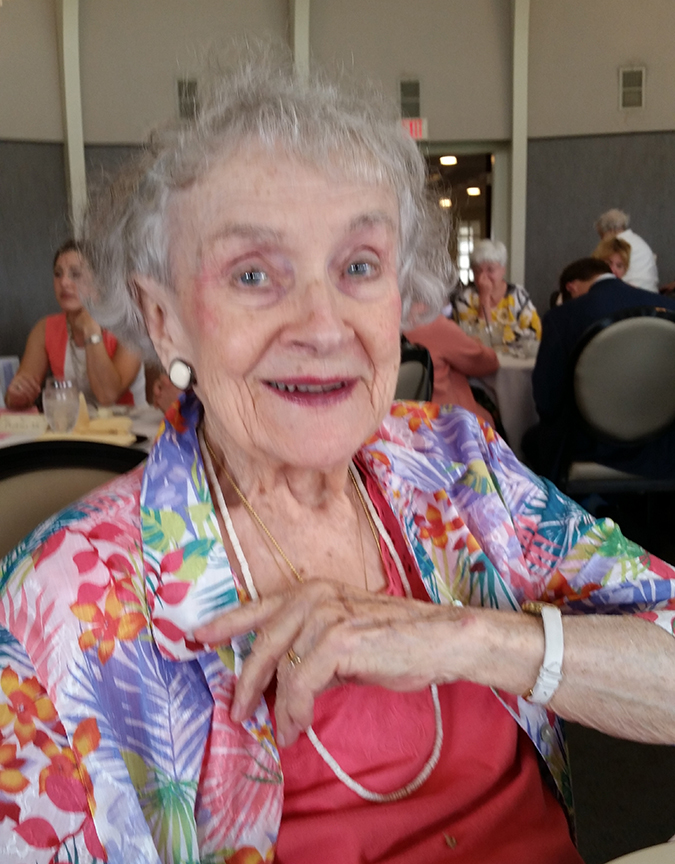 She was born in Richland, to Charles Edward and Myrtle (Brown) Abshire on January 2, 1919. She received her BS in Secondary Education from Evansville College in 1940 and taught at Luce Township High School for 10 years. Nina Lee placed a priority on her relationships with her students – they were “each one” special to her – and until very recently, she attended monthly luncheons with many of them.

In 1944, she married Clyde W. Parker from near Chrisney. They moved to Evansville in 1947 and Nina Lee set up and managed his dental practice in Evansville for 43 years. She tirelessly supported Clyde’s professional pursuits and was also a member of local, state, and national Dental Society auxiliaries, the Daughters of the Nile, and was especially proud to be a longtime member of the Indiana Retired Teachers Association. She was also active in local investment clubs, a very special bridge club, and was President of the Rolling Hills Country Club 9 Hole League.

Nina Lee always said that her proudest “accomplishments” were her daughters, Karin and Carol. Ever the teacher, she taught them how to read, sew, type and encouraged all their scholastic efforts. She was always their #1 Fan, avidly supporting their artistic passions and never missing a performance or recital. Most importantly, she was an ever-present example of how to live a God-centered life.

Nina Lee and Clyde were charter members of Aldersgate United Methodist Church and it played a central role in her life. In addition to teaching Sunday School and serving on nearly every committee of the church, she was also one of the first presidents of the Women’s Society of Christian Service and participated in endless church suppers and programs. It was especially important to her to welcome and get to know every new member who joined the church. She rarely missed a Sunday.

She was preceded in death by her parents; her husband, Clyde; her daughter, Carol Verderese; her son-in-law, Don Heinicke; her cousins, who she grew up with like siblings, Cleon Brown and Jerry Ray; cousin, Kent Ray; and brothers and sisters-in-law, Glen and Jeanette Parker and Ruth and Charlie Lehmkuhl.

Nina Lee is survived by her daughter, Karin Heinicke; her grandchildren, Leanna Verderese and Jake Verderese; son-in-law, James Verderese; nephew, Chip Lehmkuhl; nieces, Gayle (Mike) Waters and Shari Reed; cousins Kevin Ray, Kris (Cheryl) Ray, and Rebel Brown; numerous great-nephews and great-nieces; and especially her many extended cousins who have been so very special to her throughout her life. And of course, her precious students.

Due to the COVID pandemic, there will be no visitation. Her funeral service will be at Aldersgate United Methodist Church on Monday, September 21, at 11a.m. While the family welcomes your attendance at the church, they encourage you to consider attending via the livestream at www.aldersgateum.org or https://conceptlivestream.com/embed.php?stream=12. Private entombment will be at Alexander Memorial Park.