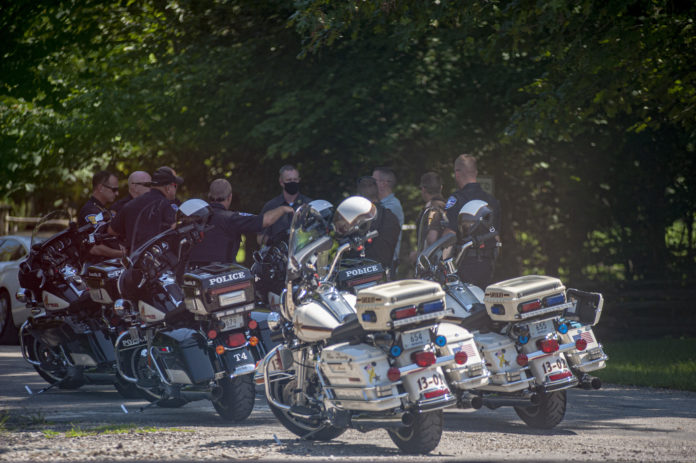 It is not every day that the Vice President of the United States drops from the sky and lands at the Lincoln Boyhood National Memorial in Lincoln City — even if said Vice President is a Hoosier by birth.

But that was exactly the case on Monday (August 17), when Vice President Mike Pence arrived in Evansville via air force one (following lunch at Roca Bar). At 3:55 p.m. I learned he didn’t eat there because a large crowd had gathered so he continued on to Spencer County.

This news office had been clued in on Saturday by Jamie Winner, superintendent of the Ferdinand State Forest (and in the interest of full disclosure, this writer’s nephew-in-law). Winner, who is also a pilot, noticed on an aviation site there was a VIP flight restriction over Lincoln City on Monday from 9:45 a.m. to 11 a.m. Central. About one hour earlier a similar restriction was listed over Evansville’s air space.

Winner and his wife, Carla Striegel-Winner, reached out to see if any press releases had been issued.

However, the news office received a tip early Monday morning that the flight restrictions were put in place for a visit from Vice President Mike Pence to the childhood home of the nation’s 16th president.

Monday mornings are not great at the news office since we (at least of late) have been publishing both the Spencer County Leader and Ferdinand News on Mondays for a variety of reasons (primarily as a cost saving measure).

While I would have loved to hop in the car and head for Lincoln City it was an impossibility, so I directed photographer, Hope Davis to skedaddle to the memorial. What followed was a lesson in persistence.

Hope is 23 and has never been sent off to quite such an auspicious occasion as a visit from the second in command of the entire United States.

When she arrived she was not allowed in and thus began the lesson. She feared she would get arrested. I told her to keep chipping away, try to figure out which entrance and schmooze the police and Secret Service who were swarming the area.

Actually, I didn’t, but it sounds more impressive than for me begging their forgiveness for being two hours past deadline with sending the pages to the press.

So why was Vice President Mike Pence in Southern Indiana on Monday?

To shoot a commercial, one would assume is for the upcoming General Election slated for Tuesday, November 3. I don’t know about you but I can’t wait to see it (and for me to say I’m anxious to see a campaign commercial is almost as unusual as me saying I can’t wait to clean the bathroom).

While local and regional news media was not invited, persistence did pay off, at least somewhat as the vice president’s motorcade passed right in front of Davis as it departed the National Memorial. Not the full on face shot with the Memorial in the background as would be really desirable, but at least proof he spent the day back home in Indiana.