A couple of male turkeys walked into the White House… 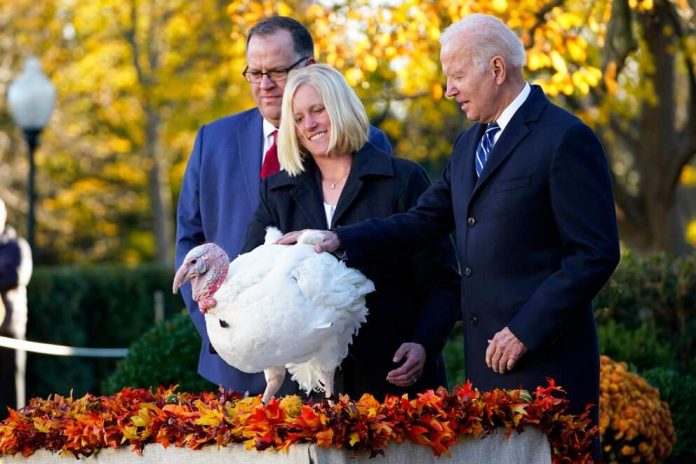 … And lo and behold — instead of being evicted (or roasted) those turkeys were granted clemency by none-other than President Joe Biden himself. Heck, he even might have been the one who christened them Peanut Butter and Jelly.

Despite what you may have read or heard on the news, the two turkeys pardoned by Biden, both 40 pounders, were not raised in Jasper, but on the Kyana farm of Andrea and Brad Welp.

Phil, as many will know, serves as Vice President of Live Turkey Operations for Farbest Farms, Inc. headquartered in Jasper, which is where the location confusion came from. He also happens to be chairman of the National Turkey Federation and one of the chairman’s responsibilities is selecting the turkey(s) that will make the trip to the nation’s capitol.

Besides not losing their heads, the pardoned turkey and his partner (sort of like the first runner-up in a beauty pageant) get to live in the lap of luxury at the Willard Hotel before dropping by the Oval Office and meeting their Commander-in-Chief.

But before making the trip, the turkeys had to go through a rigorous training process that involved practicing how to stand on a table and possibly other tricks.

This was just one of the reasons Andrea was hesitant at first when Phil Seger reached out with his special request.

“I was a flock supervisor at Farbest for six years before I became a grower,” Andrea explains. She began raising turkeys in 2014, explaining she and her husband farm together raising turkeys, hogs and cattle and growing corn, soybeans and wheat. “I mainly take care of the turkey operation and Brad mainly takes care of the hog operation and then we usually work together on the crops and cattle. Both of us came from farm families, with me being the third generation farming in my family and Brad being the fifth generation farming in his.”

The Welps have two children, five-year-old Benton and Brogan, who is 2, and the kids definitely got in on the fun.

Andrea continues, “We live on my parents’ farm, which is where my turkey operation is located. My parents are Stan and Brenda Stetter and they live right next to us.”

This was only the second time the turkeys for this grand White House tradition hailed from Indiana — the first time also being Dubois County turkeys raised by Rich and the late Joan Reckelhoff on their farm near Dubois.

Andrea explained the process for raising these esteemed turkeys.

“We placed 38 turkeys in mid July when they were just one-day-old in a special barn built specifically for them. Ever since then we had been working with them on a daily basis. They needed to be used to being around people, bright lights, and lots of different noises. So we played a radio in their barn every day with different types of music. We interacted with them several times a day and even hosted a couple school fields trips. The last four weeks I had been placing each turkey on a table once a day to get them to feel comfortable on it. I knew that at the pardoning ceremony at the White House I would be placing them on a table for the President to pardon. From early on I already had two front-runners, now known as Peanut Butter and Jelly, that just seemed to ‘act the part.’ So those two turkeys got to receive the royal treatment in Washington D.C.”

The turkeys arrived in Washington, D.C. on Wednesday, November 17, and were greeted with the red carpet treatment all the way to the front steps of the Willard Intercontinental hotel (a very iconic hotel in D.C.).

Andrea explains, “There they were checked in as guests and taken to their own hotel suite! On Thursday morning, we had a news conference announcing the names of the two turkeys, Peanut Butter and Jelly, that were to be pardoned on Friday at the White House. This is where the press got to meet the two turkeys for the first time. My family and I actually got to go to the White House with the turkeys and meet the President of the United States in the Oval Office! Then I was the one who placed the turkey on the table when President Biden walked down to pardon it. On Saturday morning Peanut Butter and Jelly went back to Purdue University at West Lafayette, where they will live the rest of their days under the care and supervision of trained veterinarians and staff members.”

Not only did Andrea have the honor of raising the official turkeys, she broke yet another glass ceiling by being the first woman ever to do so.

“The experience that I had in D.C. was awesome! I’m truly honored that I was chosen,” Andrea concludes. “The whole process will definitely be something to remember for a long time, and will be a highlight of my career for sure! It was just a fun, light-hearted event that kind of kicks off the holiday season. And everyone was so excited to see the turkeys!”

The presidential turkey pardon has a storied history. The first president to be presented with a turkey was Harry Truman in 1947, though the official White House turkey pardoning was started by President George H.W. Bush in 1989. The turkeys are always named in pairs — including 2014’s Mac and Cheese, 2016’s Tater and Tot and 2017’s Drumstick and Wishbone. In 2020, President Donald Trump pardoned turkey Corn over Cob.

The last question before the interview was over — what did the Welps dine on for Thanksgiving?