Abraham Lincoln Post 444 makes a donation and issues a challenge 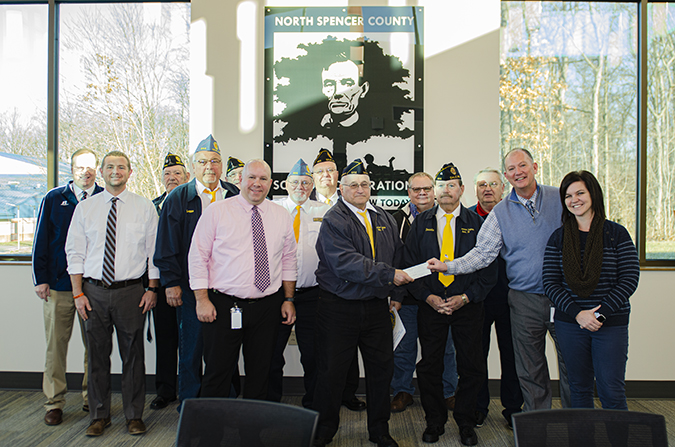 Legion members learned about a state mandate (unfunded as is often the case) to require Stop the Bleed kits in all the schools. The kits are designed especially for a school shooting with two tourniquets designed to do just as the name implies, especially for gunshots and other dire bleeding situations. Legion members saw this as a worthy goal and decided to donate $500, which would purchase about 50 kits (there are 150 classrooms in North Spencer, plus buses and recreational areas, the cafeteria, etc.).

Members of the School Safety Committee (Jody Schmitt, Ben Lawalin, Chad Schnieders and Jeff Cochren) had just completed Stop the Bleed training earlier in the morning and were on hand to thank the Legion members in attendance.

Sons of the Legion Commander Deloss Painter issued a challenge to other area organizations and businesses who might wish to contribute. He said the Legion and Sons holds raffles, cookouts and golf scrambles to raise money for community causes such as this, and others can and do likewise.

“We appreciate you guys,” said Scherry to the Legionnaires. “With this, but also with your support of our schools. We’re so fortunate to have a group of people who care!”