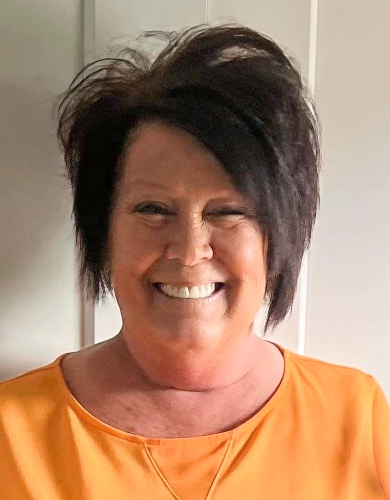 She was born May 6, 1960, in Princeton, to Jack and Patricia (Seifrig) Aldridge; and married Phillip Kern on April 28, 2007. Angela graduated from Pike Central High School in 1978. She was employed by the Greater Jasper School Corporation and worked as a bus contractor for 42 years. She enjoyed gardening, boating, camping, cooking, and most of all spending time with her grandchildren.

Angela was preceded in death by her first husband, Dale Traylor, who passed away on May 1, 2005; her parents; one brother, Mark Aldridge; one half-brother, Terry Braunecker; and one grandson, Trenton Leighty.

She is survived by her husband, Phillip “Bruno” Kern of Jasper; three children, Amber (Chad) Montgomery of Otwell, Jared (Amity) Traylor of Otwell and Brittany (Zach) Harbin of Otwell; three step-children, Lakisha Collins of Jasper, Nathaniel (Keegan) Kern of Jasper and Natalie (companion, Eric Wilson) Kern of Huntingburg; one brother, Scott (Sheila) Aldridge of Saint Meinrad; one half-sister, Nicole Kammerer of Francisco; one half-brother, David Powers of Winslow; by 15 grandchildren and one great-grandchild.

Funeral services for Angela Kern will be held at 10 a.m., E.D.T., on Wednesday, July 6, at the Nass & Son Funeral Home in Huntingburg with burial to follow at Iva Public Cemetery in Otwell. Pastor Jeff Pinney will officiate the funeral service.

Friends may call for visitation at the Nass & Son Funeral Home from 3-8 p.m. EDT on Tuesday; and also from 9-10 a.m., on Wednesday.

Memorial contributions can be made to Riley Children’s Hospital. Condolences may be shared online at: www.nassandson.com.