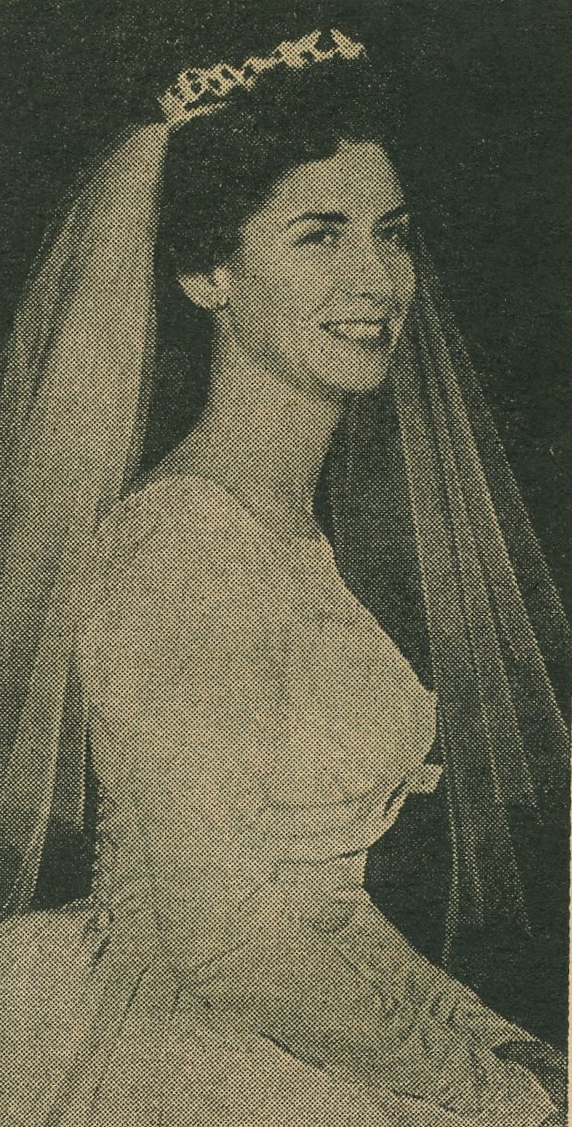 On Tuesday, December 27, at 10:00 o’clock in the morning Miss Patricia Ann Yellig, only daughter of Mr. and Mrs. R. J. Yellig, Sr., of Mariah Hill, became the bride of Mr. William A Koch, son of Mr. and Mrs. Louis J. Koch, Sr. of Evansville, Indiana.

The double ring ceremony took place at Mary Help of Christians Church, Mariah Hill with the Rev. Malachy Fulton, O.S.B. presiding. The Sanctuary was beautifully decorated with poinsettia and palms and reserved pews were marked with white satin bows entwined with greens.

The bride given in marriage by her father, as radiant in a gown of pure silk pear de sole fashioned with a square neckline enhanced with Alencon lace. The long sleeves tapered not a point over each wrist and Alencon lace extended from the shoulders down the front of the bodice. Lace applications encircled the waistline which released a full bouffant skirt, the back with a bustle and streamers, ending in a Cathedral train. She wore a finger tip veil of silk illusion with crown of open work lace embroidered with seed pearls and sequins. Her bouquet was a yellow-throated white orchid surrounded by white carnations and holly. In the bouquet were placed her maternal grandmother’s engagement ring. She wore diamond and pearl earrings, gift of the groom.

Mrs. Leon Wendholt, cousin of the bride, was matron-of-honor. She was lovely in a street length gown of pure silk pear de soie in bright red. The dress was designed with a scoop neckline and elbow length sleeves. The waistline was accentuated by a large flat bow placed in the center of the belt. The bell-shaped skirt fell in full folds form the waist line and formed flat pleats at the hem. Her head dress was a flat bow trimmed with pearls which released a small face veil. She carried a colonial bouquet of white carnations edged in green centered with small Christmas ornaments and surrounded by holly and mistletoe. White Christmas bells trimmed in red hung from white streamers attached to the bouquet. She wore a pearl pendant and pearl earrings, gift of the bride.

The groom, father of the bride best man and ushers wore Oxford Gray coats with striped trousers and wore matching cuff links, gifts of the groom.

The mother of the bride, Mrs. R. J. Yellig, Sr., wore a dress of rose colored lace over taffeta, fashioned with a satin cummerbund. Her corsage was a purple orchid. Mrs. Louis Koch Sr., mother of the groom wore a dark blue dress with matching accessories. She wore a purple orchid corsage.

After the ceremony, the bridal party received guests in the Lincoln Room at Santa Claus Land. Hors de ourves, canapés, champagne punch and cocktails were served. A buffet luncheon for all guests followed in the Christmas Dining Room.

In the late afternoon the couple departed for Evansville where they left via plane for Chicago and New York. From New York, they flew by jet to Europe where they will visit France, Switzerland, Austrian, Germany, Denmark, Belgum and England. After their return they will reside in their new home at Santa Claus, Indiana.

The bride is a graduate of Hotel Dieu School of nursing. New Orleans, Louisianna. She attended Loyola University of the south in New Orleans and graduated from St. Louis University with a B.S. in nursing.

The groom graduated from Purdue University with a B.S. degree in Mechanical Engineering. He had Post graduate work at the U. S. Naval Academy in Annapolis, Md. He is now President and Manager of Santa Claus Land, Santa Claus, Indiana.