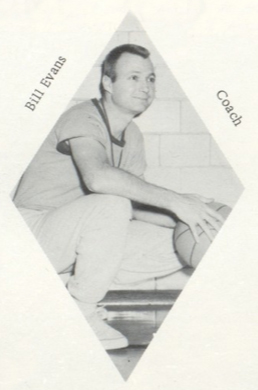 Bill Evans and his Rockport Zebras will be present at the Ferdinand goalhouse Friday evening for their annual meeting iwht the Crusaders. Bill has been using a very strong roster of seniors this season, headed by their outstanding senior 5-10 Charlie Cannon, a superb athlete who has consistently in the double column this season and on at least four different occasions scored exactly 21 points! Cannon Frequently plays in the forward slot!

Following Cannon is another extremely able senior, Gene Vincent, who stands 5-10 also. Vincent is another of of Rockport’s gunners, which indicates a lot of accurate outside shooting!

Steve Whitaker at 6-1 and a senior will probably fill in at center. Steve consistently, but not always in the top brackets. He probably is used as the key play maker for both guards and forwards.

Mike Chinn a 5-9 senior guard is usuall the running mate of Vincent and also is a steady scorer, but not in the same echelon with Cannon and Vincent.

Senior Jim Boyd at 5-8 usually rounds out the starting five for the Zebras. Boyd is in the same scoring bracket with China and is also a dangerous man to leave standing idle.

Sam Abshier, a 6-1 sophomore has been action in most of Rockport’s games but did not register very high until their contest with Holland when he nicked the double digit for 10.

Rockport has registered victories over Ft. Branch, Cannelton, Dale, Mt. Vernon, Holland, and others. A decisive loss but a splendidly-played game was when Rex Mundi registered a 44-40 win over them. Huntingburg also defeated the Zebras 69-50. Their more recent 59-48 loss to Tell City too place Tuesday.

Ferdinand’s Record with Rockport down through the year’s shows the wins split right down the middle. Starting back in 1951 Rockport took a 70-39 win and followed through the next season with a 51-38 win. Ferdinand then took a pair 55-54 and 64-52. In 1958 Rockport came through with a 54-47 and the following year Ferdinand cancelled it out 63-42. Last year all will remember with a pair a very tight contests. At the Boonville tourney Rockport defeated Ferdinand in a thrilling over-time contest 53-52. Then on January 22 at Rockport, Ferdinand staked claim to an even more thrilling double-overtime contest 55-54! That season saw two greats clashing. Wayne Bouldinghouse for the Zebras and Marty Niehaus for the Crusaders were graduating seniors. Both men set new all time scoring records at their schools.

Ferdinand’s Crusaders are having their troubles this season, trying to get their machine rolling. They have not enjoyed a win since November 25th when they downed Oil Township 84-65. Several Scoring potentials for the Crusaders could launch a surprising attack at most any time, but up until now they are still waiting. Senior guard Joe Verkamp was injured in practice this week and will be sidelined for this contest. Coach Wahl, in his first season at the helm of the Crusaders, also is in the act of rebuilding the team that carried eight seniors on the roster the previous season, allowing but one junior Tom Vaal to see extremely-limited action. This is the only experience coach Wahl has to work with this season, which places quite a load on both sets of shoulders. Perhaps Friday night will see a turning of events when these two rivals meet. Prelim contest will begin at 6:45 with the varsity to get underway at 8.