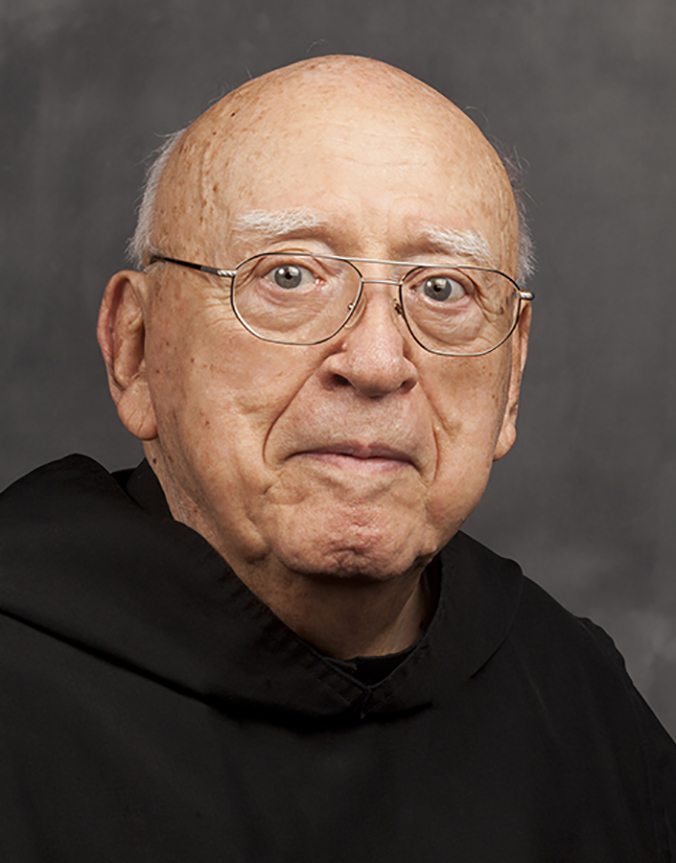 Father Bonaventure Knaebel, OSB, monk, priest, and former archabbot of Saint Meinrad Archabbey, died in the monastery infirmary on Friday, January 22, 2021. He was 102.

Fr. Bonaventure was born in New Albany on September 6, 1918, to Vincent Joseph and Mary Elizabeth (Moore) Knaebel. He was given the name James Merton at his baptism. After completing his elementary education at Holy Trinity in New Albany, he entered the high school at Saint Meinrad in 1931.

Immediately after ordination, Fr. Bonaventure began graduate studies in mathematics at The Catholic University of America in Washington, D.C., earning an MS degree in 1946.

Returning to Saint Meinrad, he taught in Saint Meinrad High School and College from 1946 to 1955, serving also as assistant spiritual director in the School of Theology. During these years, he also was assistant manager of The Grail and of the Abbey Press, and he studied advanced mathematics for three summers at the University of Pittsburgh.

Fr. Bonaventure was elected coadjutor abbot on June 3, 1955, to succeed Archabbot Ignatius Esser, and he was blessed as the fifth abbot and second archabbot of Saint Meinrad on August 31, 1955. He was the first Hoosier native to lead the monastery and, at 36, one of the youngest Benedictine abbots.

Under his leadership, Saint Meinrad Archabbey saw the construction of its first guest house and of St. Bede Hall, which provided a residence hall for college seminarians, science laboratories, and music practice rooms until the College closed in 1998.

He also oversaw the foundation of two monastic houses – St. Charles Priory in Oceanside, CA, (now Prince of Peace Abbey) and St. Benedict Priory in Huaraz, Peru (which ceased operation in 1984). He also formed a Development Program Committee and reorganized the Abbey Press.

Saint Meinrad School of Theology and the College of Liberal Arts achieved accreditation by the North Central Association under his direction, the Board of Trustees was completely revised, and a Board of Overseers consisting of diocesan priests and laity was organized. Fr. Bonaventure resigned from the Office of Archabbot on June 3, 1966, having served 11 years.

Fr. Bonaventure then began missionary work at Saint Meinrad’s foundation in Peru, South America. After eight years, he returned to the United States to serve from Saint Meinrad as mission procurator for the Huaraz foundation, work he continued for five years. In 1979, he accepted an assignment as pastor of Sacred Heart Parish in Jeffersonville for two years, after which he spent five years as pastor of St. Michael Parish in Charlestown.

In 1986, the Abbot President of the Swiss-American Congregation sought his experience as an abbot and as a South American missionary and asked him to serve as administrator of Monasterio Benedictino in Morelia, Michoacán, Mexico, which he did for two years.

Fr. Bonaventure returned to the abbey in 2003. He was 85 years old, but he assisted in the Development Office and occasionally provided assistance in local parishes. For some years, he also regularly presided at Mass in the Infirmary Chapel and continued to preside at Spanish-language Masses at St. Mary’s Parish in Huntingburg.

At the time of his death, he was the senior in age, profession, and ordination in the Swiss-American Benedictine Congregation. He was in the 82nd year of his monastic profession and the 77th year of priesthood.