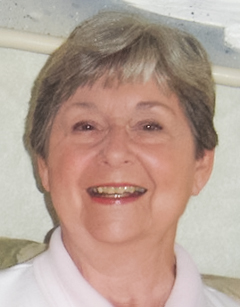 Joanne Pfleger Walker, 92, passed away on Thursday, March 5, 2022, surrounded by the love of her family.

Jodie was a 1947 graduate of St. Agnes School for Girls and a 1951 graduate of Purdue University with a degree in Home Economics. She spent the first 18 months of her marriage in Kitzingen, Germany, where Ben was stationed with the Army in 1951. During this time they built memories together traveling through Europe. She was a stay at home mother creating a loving and harmonious home filled with laughter and love until 1972 when she became a Home Economics Teacher at North Junior High for Lima City Schools in Lima, OH.

She was a member of St. Nicholas Catholic Church in Santa Claus, where she was the organist; St. Charles Borromeo Catholic Church in Lima, OH; St. Vincent de Paul Catholic Church in Mount Vernon, OH, and St. Michael the Archangel Catholic Church in Findlay, OH. She and Ben looked forward to winters in Sebring, Fla. and summers on the lake. She adored being a grandparent, found time for golf and tennis, and loved gardening and house projects. She was an avid reader as well as an avid listener, giving time and encouragement to those she loved. She had a deep love of the arts and was known to paint, play and create. She enjoyed vacationing with her family, entertaining and boating.

The funeral will be at 10 a.m. CDT Saturday, May 21 at St. Nicholas Catholic Church in Santa Claus. Burial will follow in the Garden of Memory Cemetery in Gentryville.

Memorial contributions may be made to Birchaven Village in Findlay, Ohio by following this link: https://www.bvhealthsystem.org/give.