Patriots Prepare for the 2020 Season 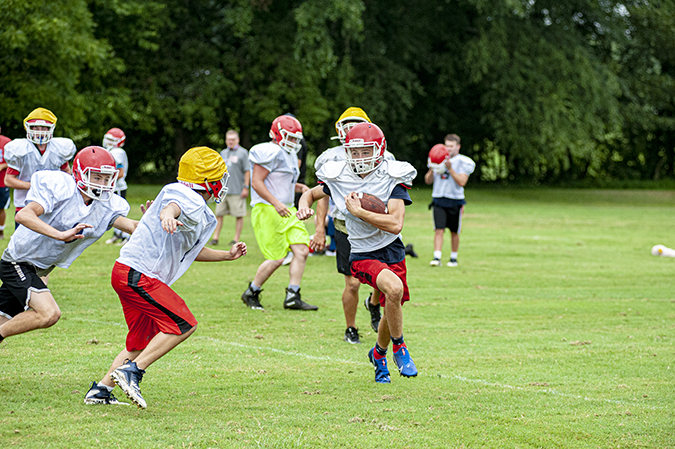 Photo and Story By: Hope Davis

Since the cancellation of post season winter sports on March 16th, (along with the entire spring sport season) in response to the severity of the Novel Coronavirus, COVID-19, there has been much debate as to how the IHSAA would guide our school athletics.

As of Tuesday, July 28, it has been 134 days since the abrupt end of post season basketball. As heart-breaking as it was for all schools around the country, the Leader is particularly sympathetic to our two Spencer County schools. It was especially devastating because both North and South Spencer boys basketball teams had just completed successful seasons, possessing such talent and opportunity to move deeper into the post season realm. Both schools won their sectionals on the same night and were scheduled to play in the regional games. Alas, those state championship aspirations were cut short for every team earning the right to continue on in the play-offs. While winter sports teams were able to complete their regular season games, spring sports athletes were robbed of the chance to leave their mark on 2020.

Much anticipation has led to this very moment. Will fall sports take place? What will games look like? How will social distancing recommendations be handled? What are the coaches doing to ensure the health and safety of student athletes and essential staff?

Heritage Hills began their football practices July 6th, with especially strict guidelines as to what athletes and staff were allowed to do and for how long they were allowed to do it. Starting the 6th through the 19th, they were allowed to hold contact-less practices. Due to the inability to make contact and with football being very much a contact sport, the Patriots stuck to focusing on strength and conditioning. Head Coach Todd Wilkerson saw opportunity despite difficulty; while contact was prohibited since it was so early in the preseason it was the perfect time to get his athletes back in shape after 100 plus days in self quarantine. During that same period before every practice all athletes and staff had to complete and record a series of questions the staff had been trained to ask. Use of locker rooms was prohibited. Student athletes were only allowed to be on campus up to 15 hours per week and complete four conditioning sessions not too exceed two hours. Two activity days were granted a week while being limited to three hours per those two days. While in the gym, capacity was limited and was reduced to half, also during gym attendance no spotters were allowed for weight lifters.

Starting July 20, all sports were given the go ahead to allow spotters in the gym and were allowed to begin contact practices. Daily wellness checks for athletes and staff before practice is still required. Equipment use is allowed but every piece must be sanitized after practices. Other than social distancing when possible, coaching staff and other essential personnel are to wear a mask when they must be within six feet of others, and all regular IHSAA rules pertaining to each individual sport have returned to normal. All rules in place for COVID precautions and guidelines were set for all high school sports in Indiana, not just North and South Spencer County schools.

Games will very likely look much different this season and it’s not just because of the new 2020 Schedule. Social distancing will not be going away any time soon. It is still to be determined how fan ticket purchasing, seating and capacity will look like for this season, but not much seems to be in the works as to how different the sport will look during game play. Its just not possible to play football and not be within less than a few inches from another player, much less in full contact with another being. So while real precautions and preparations are taking place off the field, Coach Wilkerson believes it is imperative for his players to make smart decisions when away from the sport. The less people they are in contact with and the more social distancing, hand washing and mask wearing they do outside of football the more likely the athletes will be able to continue playing.

Despite COVID being the Patriots most challenging opponent, they have a few more new opponents to add to their schedule and prepare for this season. Due to the Big Eight Conference not having enough schools for a full conference schedule, the teams left in the conference moved to others, forcing the PAC to be realigned and divided in two. The PAC has now been divided into big schools and small schools for football only. This year the Patriots will not see the Jasper Wildcats, Pike Central Chargers or Forest Park Rangers. Instead they will play the Boonville Pioneers, Washington Hatchets, and Princeton Tigers. This year’s summer team camp has been canceled, their scrimmage has been moved to August 15th since the guidelines restrict spectators until the 14th of August. It is likely that at-game stadium capacity will be reduced.

It is safe to say that right now nothing is certain. While high school sports are a staple for many, the most important thing is the health and safety of athletes and spectators alike. If sports are what the public wants to watch, fans must continue to social distance, wear a mask in public, and of course wash their hands. The more precautions everyone adheres to the more likely high school sports will be able to continue.