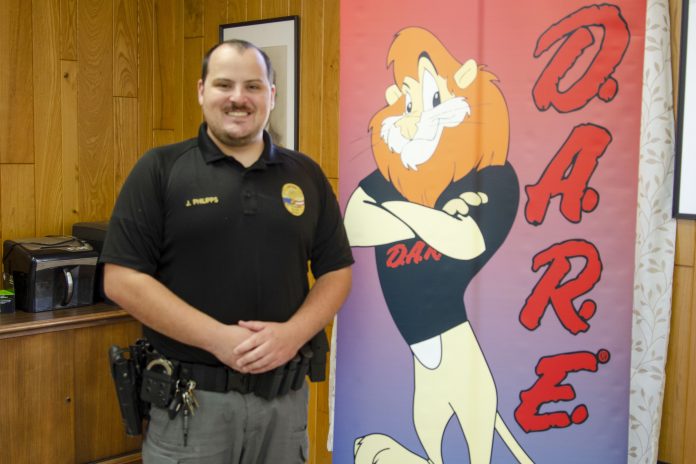 Photos and story by Don Steen

t’s been a season of milestones for the Rockport Police Department, which recently welcomed a new K9 unit and celebrated Captain Jake Philipps’ certification as an official D.A.R.E. instructor for local schools. While both the D.A.R.E. program and K9 officers are ubiquitous in the public imagination, there is a great deal of work that goes into securing these resources for local communities.

D.A.R.E. was launched in the 1980s as a drug-resistance education program by law enforcement in Los Angeles. It has since become one of the most prominent features in community outreach by police across the country, along with the iconic mascot, Daren the Lion. Kermitt Lindsey has been the South Spencer school system’s resident D.A.R.E. instructor since 1994, also serving as a school resource officer for the Rockport Police Department.
Lindsey approached Chief David Hall about securing a second SRO and educator for the program, both to expand efforts across the county as well as provide a ready replacement for when Lindsey eventually retires. Phillips quickly volunteered to undertake the complicated training courses necessary to become an official D.A.R.E. officer, due in no small part to his admiration for Lindsey and his work thus far. In fact, the two first met when Philipps was still in grade school taking D.A.R.E. classes himself.

“Kermitt Lindsey was a very big role model to me when I first started with the sheriff’s office,” said Philipps.

Philipps left the sheriff’s department in 2019 to take a position at the Rockport Police Department, where he made captain last year. The two week course covers multiple scenarios, tailored to various age groups. While most are designed for elementary to middle school, some high school materials are also covered.

While a fair amount of the working population today went through the D.A.R.E. program at some point in school, the current iteration is a great deal more complicated. Phillips noted much of the material is heavily drawn from painstaking research, gauging the efficacy of various approaches to different age groups.

“They give you all the tools to be able to teach the class,” he said. “It’s changed dramatically from what it started out as. It’s not the same D.A.R.E. that a lot of us remember.”

Hall lauded Philipps’ willingness to take on these extra duties, noting the actual number of police officers trained in the popular program is proportionally low nationwide. He hopes the local D.A.R.E. program, coupled with local initiatives like the Rockport Police Department’s new “Safety Pup,” can help engage with students and let them know there are resources in their community to help them.

Furthermore, Philipps joining Lindsey on the local SRO circuit will effectively double police coverage of schools in South Spencer and the county as a whole. In fact, they will be two of only around 130 D.A.R.E. officers serving statewide.

“That’s another officer we have in and out of our schools,” said Hall, “which ensures our school safety. Our kids are our future. That’s something we’ve gotta keep safe.”

Hall is also proud to introduce the police department’s new K9 unit, a two-year-old female German Shepherd named Dietske. Born in the Netherlands, Dietske was raised by Ronin Dog Training, receiving the last of her law enforcement education at Old Fort, Tennessee. Her skill set now includes sniffing out narcotics, tracking, apprehension and handler protection. She spends all of her time now with her handler and partner, Officer Jason Henry. Hall joked that she’s been enjoying the opportunity to share the comforts of Henry’s home through the southern Indiana summer.

“I think she’s being babied right now,” he said.

However, Dietske and Henry will be working closely together going forward, seldom apart. That means sharing a ride that can get hot in the summer sun. Fortunately, modern safety features are tailored to ensure Dietske’s safety.

For example, Henry’s vehicle comes equipped with temperature controls to ensure safe conditions for his animal companion. There are also numerous safety features to ensure Dietske cannot be forgotten in the rush of a sudden development requiring Henry’s immediate attention. Alarms, fans and window controls will kick in after a short time to make certain she is not left behind in a chaotic situation.

Hall credited Mayor Don Winkler for helping secure a K9 unit for the Rockport Police Department. This is an issue close to Hall’s heart, as he began his career as a K9 handler for the sheriff’s department in 2008 and is quite convinced of their capacity to contribute to the efforts of their fellows in uniform.

“I felt that a K9 would be very beneficial to the community,” said Hall. “Mayor Winkler has been very supportive of the program.”