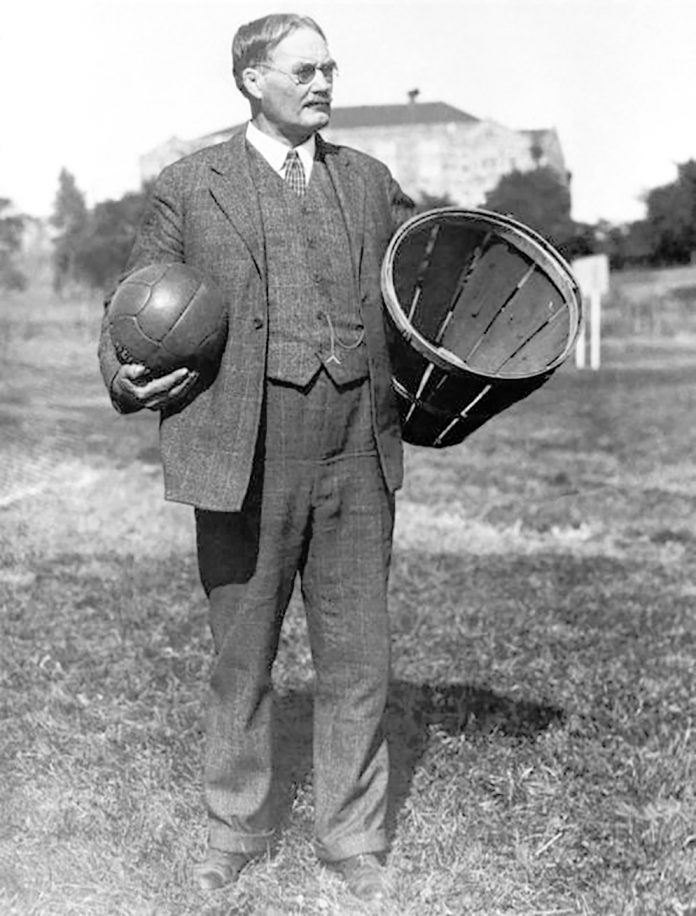 December. Amidst all the hustle bustle of the holidays and all this Covid mess, I think of basketball games as the #1 competitive winter sport. So how did it all begin?

The game of basketball was created in 1891 by Dr. James Naismith who was a physical ed instructor at the YMCA in Springfield Massachusetts. Guess this prompted me to see what YMCA actually stood for. The answer: Young Men’s Christian Association.

Upon request of Naismith’ boss, he was to create an indoor sports game that helped athletes keep in shape in cold weather. Naismith approached the school janitor, hoping he could find two 18” square boxes to use as goals. The janitor came back with two peach baskets instead. The objective of the game was to throw the basketball into a fruit basket nailed to the lower railing of the gym balcony. Spectators in the balcony would interfere with shots, thus the backboard was invented.

A soccer ball was used for the first two years. In 1894 the first basketball was marketed. It was laced, measured close to 32” or about 4” larger than the soccer ball. The official ball size now is 30”. Naismith then drew up the 13 original rules which describes the method of moving the ball and what constituted a foul. A referee was appointed.

A man was stationed at each end of the balcony to retrieve the ball from inside the basket. Every time a point was scored, the game was halted to bring out a ladder and retrieve the ball. It wasn’t until a few years later the bottoms of the peach baskets were cut out to let the ball fall loose.

The game would be divided into two 15-minute halves with a 5-minute resting period in between. The teams were chosen with three centers, three forwards and three guards per side. Originally, players wore one of three styles of uniforms: knee length football trousers, jersey tights commonly worn by wrestlers or short padded pants plus knee guards. Two of the centers met at mid court where the ball was tossed and the game of “basketball” was born. In the early years, games were frequently won with point totals less than 30 and the game from spectators’ viewpoints was slow.

As for their uniforms, it was unheard of for women to show “skin.” Women wore wool bloomers — baggy knee-length pants that fastened below the knee with stockings that covered the lower legs. As hemlines rose in popular fashion, so did the length of the bloomers. Hemlines and bloomer length were not the only thing to rise; so, did complaints that such uniforms were too revealing. Ironically, attendance at games also rose.

Now for my “Fun Facts”

1. In the early 1900s, basketball players played in cages made of chicken wire to keep players from falling into the spectators’ seats.

2. Originally two teams of nine players made up the game.

3. A warm basketball is bouncier than a cold one because the molecules in a warm ball hit its inside surface at a higher speed.

4. Dribbling the ball was not allowed when the sport began.

5. Players would rub coal dust on their hands to grip the ball better.

6. The iconic “Air Jordans” used to be against the NBA dress code. Michael Jordan paid an NBA fine each time he wore them rather than play the game without them.

Rockport High School’s team name was originally “Zebras.” It is said that Joe Hargis named them Zebras because of their original uniforms being striped. In 1954 the Zebras won the only sectional championship in Rockport history. That was until 1979 when the South Spencer “Rebels” were the only team to go undefeated and win a regional title.

Lastly, my favorite picture that comes from our own “Rockport Zebras” is the picture of the school’s mascot who attended local basketball games. A donkey was painted as a zebra and taken to games to show their spirit.