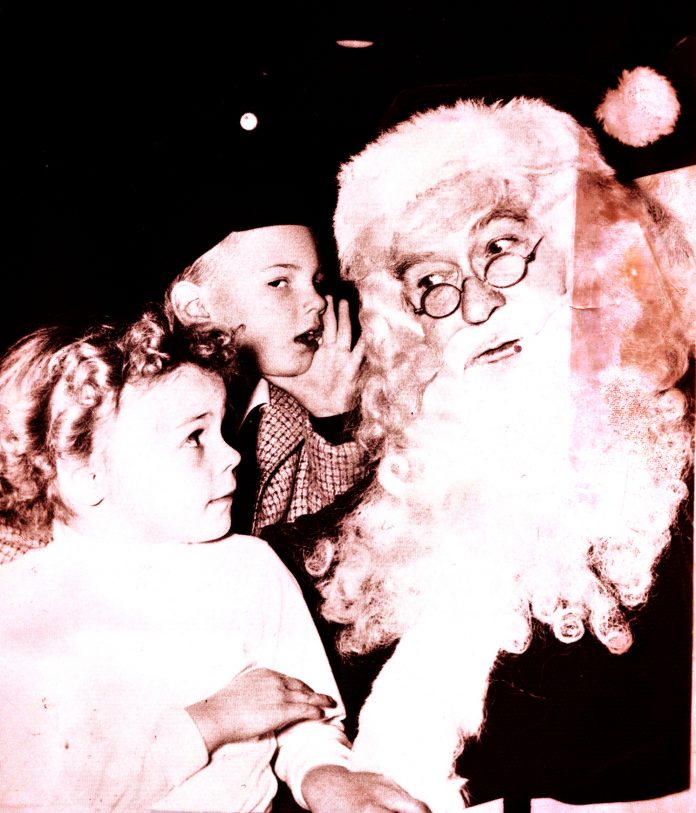 Where else would our spotlight roam at this time of the year, but to Santa Claus, where we have a celebrity who is known all over the world. . . Jim Yelling, the Santa Claus of Santa Claus Land.

Santa Jim is a twinkling, stocky man, who has been chuckling like Santa for so many years, it rolls out naturally. He will be 77 years young next February, and has no thought of retiring. He says that he is doing the thing he enjoys most of all. . . making people happy, and will never retire as long as he can stand on his two feet.

One gets the idea that he has always been about 77 years old, and was never a young man, but that is not the case at all. Born at Mariah Hill, Jim enlisted in the U.S. Navy in 1913, back in the days when ships burned coal, and he shipped in as a Coal Passer, sliding big steel hods of coal from the bunkers to the floor of the boiler room, After advancing to the rate of Chief Machist , Jim left the active Navy and entered reserevs in 1928. During the tour of duty in the active Navy, he crossed the Atlantic 62 times. He took many Liberty Ships down the Ohio River to the sea during World War II. Jim was honorably discharged from the Navy in 1933.

While on duty at the Brooklyn Navy Yards, Jim’s heart was touched by the wondering awe of the city kids being entertained on his ship, the U.S.S. New York. He then vowed to do what he could to perpetuate the Santa Claus tradition.

Jim returned home from the Navy in 1924 to marry home-town girl, Miss Isabelle Schue. Two children blessed their lives: son Ray Jr., is retired also from the U.S. Navy; and a daughter Patricia, is married to W. A. Koch, they owner of Santa Claus Land. They have five children.

Returning to Mariah Hill, Jim Yellig began playing Santa Claus for the children in neighboring communities. His wife Bella, made his first uniform our of red flannel and trimmed with cotton batting. His whiskers were bought at a dime store. Today, his costumes are made of the finest red velvet, custom tailored at about $150 each (he wears out two or three costumes a season). His beard is custom made also by Max Factor of Hollywood of yak-hair and costs $125, Several years ago, he grew his own beard and mustache, but it was too bothersome to keep trimmed exactly right, and he reverted to the manufactured beards.

Jim Yelling has always been very active in American Legion activities. Living so near to Santa Claus, it was fate that guided him into his present role. Back in 1930, a friend of his, Jim Martin, the Postmaster at Santa Claus, Indiana, told him of the many, many letters he received each year from children. Not knowing how to answer all of them, he enlisted the help of local citizens, and Jim Yellig. Jim was working at the Kandy Kastle in old Santa Claus, and would spend as much time as possible, answering the letters. This has grown to such proportions, that today, over 50,000 letters arrive at the Santa Claus post office. The job of answering them is distributed to various groups such as the American Legion, St. Meinrad Archabbey individual citizens such as Mrs. Minnie Fischer of St. Meinrad who has neighbors come in and they answer over 5,000 letters in a Christmas season.

In 1935 the Santa Claus American Legion pst was organized and the DX Oil Company donated $500 to purchase a motorized sleigh and reindeers. This unit, along with Santa Jim, became well known throughout the United States. Jim has attended 36 National American Legion Conventions and has made public appearances in every major city in the USA including New York, Philadelphia Boston, Chicago, Detroit, Cleveland, Miami, Los Angeles, San Fransisco, St. Louis, etc.

When he officially opened in Indianapolis Hobby & Gift Show in November, it makes the 20th year for this huge affair to be opened by Santa Jim. For the past 16 years he has eaten his Thanksgiving dinner aboard an airline enroute to Miami, Florida to officially open their Christmas season.

Yelling has appeared on many of the large television networks and is always in the process of taping progress for both radio and television. His story is not a new one, it has been written in many of the major magazines such as Saturday Evening Post, The American, etc.

Santa Jim says that he can remember when all little boys wanted to be Cowboys, but today they wanted to be astronauts, Airplane pilots, doctors and scientists. The litter girls desires have not changed at all. They wanted to be either a nurse or mother, back in 1930 and that is still the biggest desire of little girls today.

Jim likes children and has said most emphathetically that he has not lost faith in the youth of today. . . for the few that are bad, there are so many thousands that are good.

Jim takes a 1-day holiday each year. . . on Christmas Day the world famous Santa Claus Land is closed, and Santa Claus, after his exausting schedule which starred at Eastertime, sits back to relax and enjoy his own grandchildren, and the good cooking of his Kris Kringle, Bella.

Santa Claus Yelling is the symbol of all that is good and unselfish and truly wonderful in humanity. . . the living promise of regard to all who are young in heart!