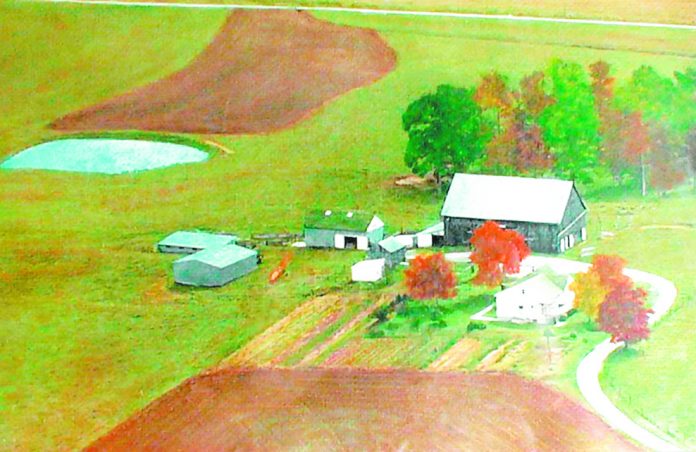 The former home of Golda and Otto Heilman will soon come down from its hillside east off State Road 162, en route to a new foundation and new life west of Christmas Lake Village. Randy Wahl, a real-estate developer currently living in Texas and grandson of the Heilmans, plans to relocate this house of family memories to a 35-acre piece of land he recently purchased. When all is said and done, Wahl will conclude two major moves, that of a cherished childhood home-away-from-home and his own return to southern Indiana.

The old Heilman farmstead is currently owned by Holiday World and Splashin’ Safari, but the theme park was willing to let Wahl have the house provided he covered the cost of moving it off the property. Wahl is very grateful for this courtesy, noting the park could have simply bulldozed the aging farmhouse.

“I’m very thankful to them for letting me have the house and they’ve been patient with me,” he said. “It’s kind of a liability, an old house sitting around for a long time.”

Otto and Golda married in 1955, and completed their Santa Claus home a year later. While structurally stable, the home is currently a far cry from its heyday in the 1960’s and 70’s, when it served as a routine weekend getaway for a young Wahl, his siblings and cousins. Indeed, his immediate family made the trip from Huntingburg out to the Heilman farm almost every weekend. At that time, farm life still featured many time-honored implements that today are generally found primarily in works of art. Early combines had trouble in some low-lying areas, so Otto and Golda made use of two faithful horses, Barney and Fred, for more traditional field work. Naturally, these workhorses doubled as entertainers on the weekends, offering visiting family a chance to ride high in the style of another time. Wahl himself tended to avoid that particular attraction, having taken a fall at one point. However, that did little to deter him from enjoying these weekend getaways.

From watching his grandfather handpick corn to simply running around the scenic hillside or enjoying the nearby pond, the old Heilman farm stands prominent in Wahl’s childhood memories. Even now, at 63, it stands as a monument to some of his happiest moments.

“It was like sacred ground to me,” said Wahl. “It was like heaven. I would give anything to just go back and live on that hill.”

Otto was like a second father, and Golda made sure everyone was fed like royalty on that little hilltop domain. The Wahls were often joined by other relatives, including the Stillwells, Garlands, Heilmans and Sermersheims. Later in life, Otto helped provide gas for Wahl’s automotive sojourns.

“They just lived for our family,” said Wahl.

Unfortunately, the farm changed hands over the years, and Wahl was not in a position to buy back the property. Relocating the house itself to new ground is the culmination of a long road back home.

Wahl moved to Texas in 1982, taking a position as a state trooper. Eventually, he shifted his interests to real estate, where he has found success. Still, he always found himself drawn back to his childhood haunts, even as time flew by.

“What you don’t realize is that short window you have to enjoy the farm,” said Wahl. “You grow up, you’re 10 years old, then you’re 18 and you go to college. You don’t think about the farm not being there forever. Next thing you know, another guy owns it and you can never get it back. Of course, it takes a while to get successful, I just missed the opportunity there.”

However, Wahl’s recent property acquisition in Santa Claus now provides a chance to resettle and restore the old home, preserving a piece of the town’s old agricultural history as well as many treasured memories. In addition to Holiday World for letting the house be relocated rather than demolished, Wahl is very grateful to the town of Santa Claus for helping plan its upcoming journey across town to its permanent home. He said Utilities Superintendent Russ Luthy has been very helpful in the process, ensuring a clear and stable path is available when the time comes.

As of last week, MCF House Movers of Petersburg had the main structure of the house lifted off its foundations and loaded for transport. However, recent snows made transport impractical due first to ice and later mud. Taking a farmhouse off its perch of nearly 70 years is no easy task, and will have to be undertaken carefully.

Wahl said he greatly appreciates everyone that is helping make this undertaking possible.

“Everybody’s been good to work with,” he said.

Wahl himself hopes to relocate back to this area within the next year, or at least as soon as he can wrap up some of his final development projects in Texas. Once here, he will begin hashing out potential development plans in his childhood home. In addition to his 35 acres in Santa Claus, he also owns 47 acres in Huntingburg. Initially, he was planning to build a wedding venue in the latter location, but plans could easily change. As for his Santa Claus property, Wahl said he’s currently in a “wait and see” situation. He’d like to know more about his neighbors, and their development plans, before settling on any particular project. One potential idea, and one Wahl would quite like to pursue, is a winery. However, he noted the area could also be used for cottages, retirement housing or other developments as well.

Regardless, the old Heilman home will likely be converted into an office, or a gift shop, for whatever enterprise may follow. For now, it will be a project in and of itself, with Wahl eager to put his lifetime of home repair and restoration skills to use on a venture very near to his heart.

In addition to installing new plumbing and wiring, Wahl will have to rebuild the old porch that characterized the house’s exterior profile. He also plans to completely restore as much of the original structure as possible, owing in part to skills he picked up as a kid here in southern Indiana. For example, Wahl plans to reglaze the original windows, a skill picked up on odd jobs even before home restoration became his career.

Once complete, the old Heilman homestead will serve as a snapshot of how the town of Santa Claus once appeared before becoming a global destination.

“To me, there was more to Santa Claus than Holiday World,” said Wahl. “It was my grandparents’ farm. It seems every farmhouse is gone now.”

While things have changed a great deal since Wahl left for Texas, he is still eager to set aside the hustle and bustle of Texas for this corner of southern Indiana.