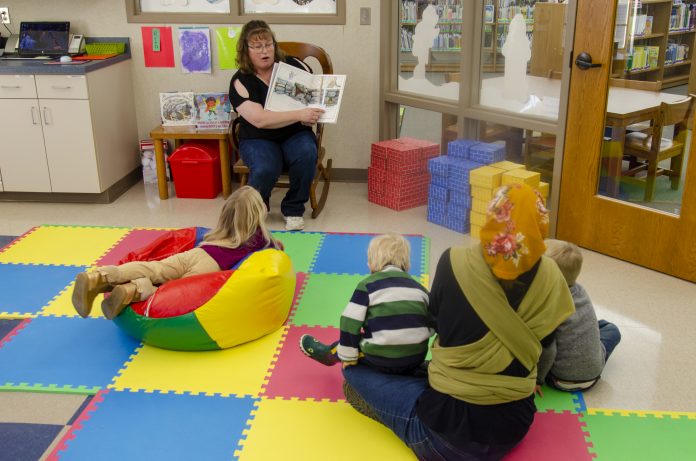 The Lincoln Heritage Public Library is working to help keep spirits up through the winter season, with plenty of activities on the calendar for kids of all ages. Both the Dale and Chrisney branches are hosting Story Time Social Hour throughout the month. Story times are 9:30 a.m. and 2 p.m. Tuesdays at the Dale branch and 1:30 p.m. Wednesdays at Chrisney.

Last week’s theme was “Snow” and included readings from a number of children’s books about how various animals acclimate themselves to the harsh winter months. The hour also included an art project allowing kids to paint their own pictures, complete with glitter. The activities climaxed with an indoor snowball fight, featuring cotton balls as ammunition and cardboard blocks for the construction of a fort. The idea was to have kids build a sturdy defense to withstand a snowball siege, though it quickly devolved into a festive frolic to collect and throw back the cotton balls. The January 25 event at the Dale branch will feature ice painting and winter sport activities.

Both the Dale and Chrisney branches are also hosting S.T.E.A.M. Tinkers for 18-month to five-year olds, as well as siblings. These include challenges in the fields of science, technology, engineering, art and math. Participants may drop in anytime between 3 to 4:30 p.m. to complete these challenges on the second Thursday of the month in Dale or the fourth Wednesday in Chrisney. S.T.E.A.M. Explorers, a similar program for ages six to 12, will be open at the same time on the third Thursday of the month in Dale and the second Wednesday in Chrisney.