Riding the Lightning in Spencer County 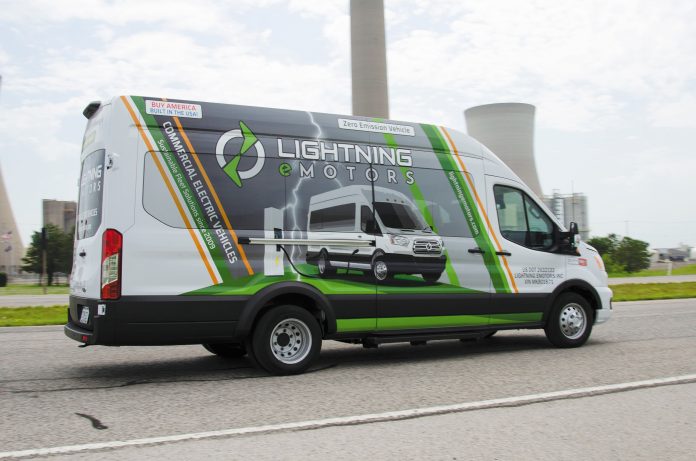 Story and photos by Don Steen.

Electric vehicles, apart from golf carts perhaps, are still a relatively rare sight outside the metro areas of southern Indiana. A fair amount of commuters along U.S. 231 or Rockport’s city streets might have caught a glimpse of at least one all-electric passenger van, however, wearing its make and power source on its face. Lightning eMotors, an electric-vehicle manufacturer based in Colorado, rolled out two of its products for a demonstration at the Lincoln Commerce Center last Tuesday. Several representatives from local businesses and organizations, and a few mechanical enthusiasts, took the opportunity to get a look under the hood and behind the wheel of these vehicles.

This “Lightning Day” demonstration stemmed from a partnership with the U.S. Department of Energy’s Drive Clean Rural USA program, an eight-state pilot project including Indiana that seeks to help connect rural counties with resources and information on alternative-fuel vehicles. Essentially, these partnerships aim to give rural communities more options when it comes to outfitting their vehicle fleets, and let them know if there are potential savings emerging from new technologies and incentive programs.

Lightning eMotors specializes in commercial vehicles, ranging from shuttle and cargo vans to school buses and Class 6 cargo trucks. The typical ranges for Lightning eMotors fleet range from 120 to 170 miles, with passenger vans at the high end and the Class 6 delivery trucks generally topping off at 130 miles before a recharge is needed. While these ranges often work well for metro areas, where commutes and delivery routes are shorter, the range limits could be more daunting in rural areas where charging stations are more sparse and travel distances greater.

Overcoming these concerns is one reason Lightning eMotors and other electric vehicle manufacturers are making house calls through the DOE’s Drive Clean program. Marcie Willard, a grants specialist for Lightning eMotors, said there are a number of incentive programs to help specific industries and organizations accommodate these vehicles into their fleets. She added that it is important to let people see, and drive, these vehicles in person to better gauge how well they might suit local needs.

“People have questions,” she said.

There were no shortage of experts on hand to share their knowledge and experience. Local consultant Paul Medcalf of Drive Clean Indiana, who helped organize the event, was joined by Drive Clean Indiana Executive Director Carl Lisek at the Lincoln Commerce Center, along with Bill Walter of the Battery Innovation Center in Newberry, Indiana. McCallister Miller, a marketing specialist, served as co-pilot as a series of visitors took test drives throughout the day.

Willard noted Lightning eMotors uses lithium batteries, with an average lifespan of around eight years. Miller pointed out battery replacements are generally covered by the company’s insurance, and the company recycles older batteries into mobile charging units. These mobile charging units allow Lightning eMotors vehicles to recharge in more remote areas where charging stations are unavailable. A direct-current “fast charge” mobile unit can bring a vehicle back up to full charge within three hours if need be.

Lightning eMotors currently works with General Motors and Ford, who provide the chassis for most of the companies current range of vehicles. However, Willard said the Lighnting eMotors is working on its own chassis as well to make itself less dependent on others. While small, Willard said Lightning eMotors has been comparatively “nimble,” allowing it to adjust to labor and supply shortages since the pandemic.

One major selling point for Lightning eMotors is its “Built in the USA” designation, meaning that enough of the vehicle and its components are domestically sourced to qualify for a number of state and federal grants. Such incentives can bring the price tag down considerably, even beyond the point of competitive with more traditional options.

Willard also emphasized the generally higher quality one can expect from domestic vehicles and parts, especially when it comes to newer technologies.
“From a quality perspective it makes even more sense,” she said.

South Spencer High School Vocational Teacher John Hurley took the passenger shuttle out for a spin through Rockport, with Miller offering some explanations for the distinct feeling behind the wheel of these vehicles. Hurley noted the lack of a transmission shift as one steps on the “accelerator” pedal to get up to highway speeds on US 231. Miller explained this was due to the permanent magnet motor, similar to the kind used in General Motors’ Chevrolet Bolt and Volt passenger cars.

Hurley also noted an odd feeling when the brakes engaged, as Lightning eMotors vehicles use regenerative braking to convert kinetic energy into usable forms rather than heat. This, in tandem with traditional brakes, help stave off wear on the vehicle’s braking system.

Another noticeable aspect of the trip was the general silence, as the air conditioner was the primary source of noise apart from the tires on the road. Miller explained the air-conditioning system is belt driven, similar to diesel vehicles.

All in all, it was a trip like any other, though Hurley said it could take some getting used to, much like any new vehicle that behaves a little differently than your last. The dashboard keeps a constant “fuel” gauge like any other vehicle, offering the driver information on the remaining charge of the battery, mileage and other information.

Miller said each vehicle can be tailored to the needs of the customer. For example, efficiency can be prioritized to maximize mileage per trip or the top speed can be limited to the maximum allowable on any road along the route.

Lisek said Drive Clean Indiana aims to use events like last week’s demonstration to help build relationships with local businesses, as well as dealerships and other potential customers. He emphasized that as states, the federal government and the world at large continue to incorporate alternate-fuel vehicles, it is important to ensure rural areas have the same range of opportunities available to them. Lisek also noted that if such vehicles begin to arrive in this area in larger numbers, there will be a high demand for electricians and mechanics to help accommodate and perhaps even manufacture them.

“Our own people creating our own jobs,” he said.

According to Miller, Lightning eMotors currently has 250 vehicles on the road, producing an average of three to four per day at present. He expected the company’s vehicles to log a total of 2 million miles traveled in the near future, if they had not met that milestone already. This could provide valuable data for the company going forward.

Miller noted business has been picking up significantly in recent years.

“It took a long time to get to that first million,” he said. “Now they’re coming up quick.”

The U.S. Energy Information Administration estimated in February that electric vehicles represented about 3.4% of light-duty vehicle sales in the U.S. While this is a very small proportion, it represents a significant increase from only a few years ago. An analysis last month from Bloomberg New Energy Finance estimated that plug-in vehicles worldwide offset roughly 1.5 million barrels of oil per day in 2021. That represents about one fifth of Russia’s pre-invasion oil exports.