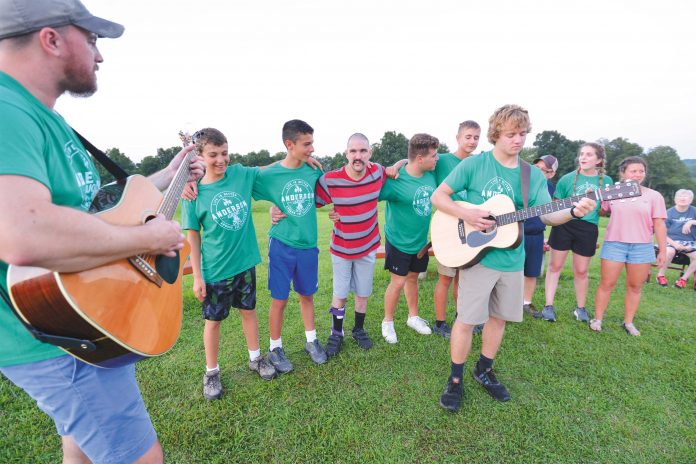 Story and photos by Kathy Tretter

Living life to the fullest!

The above describes the experience of a week spent at Anderson Woods Summer Camp, nestled on 165 acres in the pastoral beauty of Perry County’s rolling hills.

Anderson Woods is a special place, created by Judy and David Colby in 1978 for those with special needs. Judy envisioned a camp where everyone feels welcome and more importantly, valued. A place to learn new skills and make friends. Her experience came firsthand as her brother, older by 10 years, suffered brain damage at birth. He was not given any challenges and worse, neither was he provided with any tools to embrace the joy that is so important in life.

That very first year Anderson Woods welcomed three campers who slept in tents. The camp has grown exponentially since then and now welcomes an army of campers every summer. There are four cabins for campers (two for boys/men and two for girls/women), plus a dining cabin, with an additional camper cabin planned for those with mobility issues. Every summer the camp holds four weekly sessions for youth and four for adults.

Megan Gatwood now oversees the camp, having started as a volunteer over 20 years ago. She was not available on this particular evening as her oldest daughter, Eve, was in rehearsals at Jasper for ACT’s summer production, Matilda, so it was Director Emma Hurst who provided a tour, made introductions and shared information.

Emma, a Forest Park grad, also started as a volunteer 10 years ago. During the school year she teaches special needs at Holland Elementary. Most staff members are also long-timers who make connections with the campers, many of whom return year after year.

Take Mike Bush, 39, a Ferdinand native who has been attending camp for over 20 years. Mike introduced me to his “friend for life,” eight-year-old Oliver Gatwood, son of Megan and Isaac. He told me he loves coming to the camp and enjoys all the activities of which there are many.

My visit was on the first evening of a new session. Earlier in the day campers crafted necklaces, went creek swimming and had just finished dinner upon my arrival. They were relaxing prior to one of the highlights of the week — a hike to High Pasture for music, dancing and dessert in the form of watermelon slices.

It is not all fun and games — the campers pick vegetables grown on the property and assist with chores around the camp, providing a true sense of value and purpose. Campers help bake homemade bread and prepare jam, along with whipping up batches of ice cream. They handle other chores as well, but the fun that makes some campers start packing for next year as soon as they arrive home is probably due to the wonderful array of activities.

If the day is rainy out come the board games, however this particular week is sunny.

On Tuesday half the campers would try their hands at fishing while the other half enjoyed a hayride.

Crafts are a big part of the camping experience, including tie-dying t-shirts, the aforementioned necklace making and other creative endeavors. Creek swimming (or walking) is always a huge hit and happened to be many of the campers most treasured activity of the day, including Tory Blevins, of Louisville, who said, “I’ve been here before and my favorite thing is creek swimming, except I don’t like the fish, they bother me a little.” Tory also enjoyed a hike to the Unique Tree earlier in the day, a return trip she relished, where Emma snapped her photo.

Tory has indeed been here before. She started out at the children’s camp and then graduated to adult camp.

But for Phyllis Church of Evansville, age 72, this was her first experience at Anderson Woods — and she already loved it!

There are 10 full time staff members and from two to five volunteers on any given week, there to support and assist the 20 kids who attend kid camp for four weekly sessions followed by 25 adults with a similar schedule.

But what the counselors and volunteers appear to truly give is unconditional love.

Maddie Fella is a counselor who teaches special needs at Lincoln Trail during the school year. She is being assisted this evening by Abe and Elsa Telligman who live in Freelandville — children of the former Anna Clark who is the daughter of Pat and Sheila Clark. Anna volunteered and then worked at the camp for many years and now her children continue in her stead.

New this year is 14-year-old Isaiah Marx, of Ferdinand, who came with the Boy Scouts to help clean up pre-camping season and decided to volunteer when he learned there was a need. His younger brother Jeremiah joined him, saying their mom suggested it would be a good idea. Both are having fun with this new responsibility.

Mike Bush claims Jeremiah and Isaiah are now his very good friends. In fact, it’s a pretty safe bet Mike likes everyone at camp and relishes all the activities. “The food is good. Sometimes I pick vegetables. I like living life to the fullest,” he asserted, and appeared to be doing just that, chatting amiably on the hike to High Pasture, a favored activity by lots of campers.

Emma transported a few campers with mobility issues in the truck, along with a huge tub of watermelon. She offered a lift to this journalist who (foolishly) claimed walking would be no problem.

Most of the campers, counselors and volunteers hoofed it, enjoying the hike and the camaraderie. Mike and Oliver accompanied me up the long, steep grade with Mike sharing stories, Oliver weighing in and me huffing and puffing — but the trip to the top was well worth it for the beautiful vista in all directions!

The evenings temperature did not in any way require a campfire in the pit but campers and counselors arranged themselves in a large circle and prepared to be entertained.

They did not have long to wait.

Neighbor Henry Hagedorn climbed the hill from the other side, guitar in hand. Isaac Gatwood, Megan’s husband whom his patients call Dr. Gatwood arrived soon after, also toting a guitar.

And then the fun began.

The dueling guitarists started playing and singing with campers, counselors, visitors and volunteers joining in. A box of egg shakers and streamers added to the festivities, although some preferred to show off their treasures rather than put them to use.

Everyone joined in for a rousing Hokey Pokey.

Make that almost everyone.

One camper was missing her mom so a counselor sat with her, rubbing her back in a soothing gesture until she was ready to partake of the fun. Another needed some hugs to get her motivated and a few of the older campers were more restrained in putting their left arms in and shaking them all about.

Staff interaction was completely unrestrained and at least to this observer, they appeared to give each camper whatever he or she needed, be it assistance, a dance partner, a listening ear or a hug.

Emma explained camp is pretty much technology free, providing a big break for the counselors as well as the campers. Most activities are held outdoors, be it bubble blowing or tie-dying. For some who live in a city, camp is as much an immersion into the joys of nature as a place to interact with their peers.

In fact the social interaction among campers and with the counselors and volunteers is, quite possibly, one of the most important aspects for campers at Anderson Woods. Here they don’t need to suffer the uncomfortable scrutiny from the eyes of strangers or feel out of their element.

Emma Hunt put it this why: “I think when they [campers] are at camp they feel the most themselves.”

Which is, of course, the way everyone wants to feel.

How readers can help

Before she passed away, Patty Saalman, mother of author and renowned storyteller (not to mention founder and ringmaster of Will Read and Sing for Food) Scott Saalman made one thing perfectly clear.

Patty knew she was dying, had stage four cancer and so was able to tell her family not to spend money on flowers and mementos after her death. She wanted everything donated in her memory to Anderson Woods, a camp and project she wholeheartedly valued and believed in.

Patty’s husband, M.J., did indeed listen to his wife and the gift of over $5,000 went a long way towards building a greenhouse at Anderson Woods so even more food can be sourced directly from the property.

Recently, descendants of Andy and Katie Dischinger gathered for a cousins reunion at grandson John Schroering’s home in Jasper. John paid for the catered meal and wouldn’t take any money, so the cousins surreptitiously filled a hat with around $165, all of which Schroering donated to Anderson Woods in his grandparents’ names.

The not-so-subtle purpose of this sidebar is to let readers know that tax-deductible donations to Anderson Woods are always welcome and deeply appreciated. Checks can be mailed to this 501c3 non-profit at Anderson Woods, Inc., 4630 Adyeville Rd., Bristow, IN 47515 or visit the website (andersonwoods.org) where a convenient PayPal button is located. If interested in learning more about volunteering or scheduling a tour call 812-639-1079.