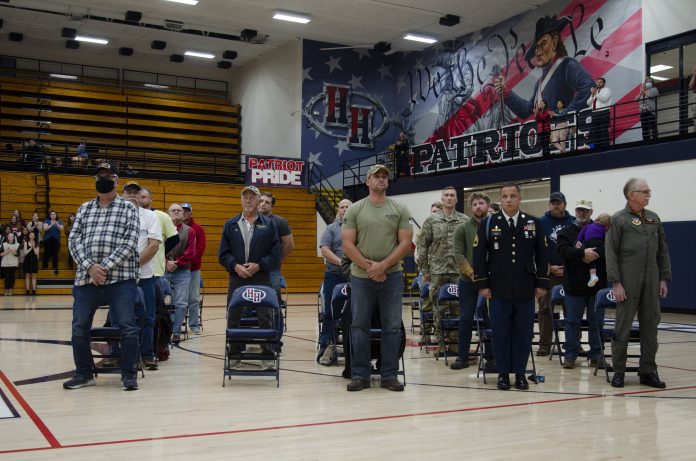 Heritage Hills students from middle through high school gathered in the Red Gym November 11 to participate in the 2021 Veterans Day program. The annual event could not be held last year, but a full slate of veterans from across the county and region paid the school a visit for this special ceremony. Band and choir students performed a variety of patriotic hymns throughout the day, as well as the official songs for all branches of the military.

Tyler Eubank introduced this year’s Veterans Day program by speaking of the courage and sacrifice of all veterans, many of whom were faced with unthinkable circumstances on the battlefield right out of high school. He also emphasized the importance of American soldiers not just as warriors, but as ambassadors representing the best of their country to the places they are deployed.

“Veterans are not just fighting machines,” said Eubank. “They are the champions of the American cause.”

The keynote speaker of the evening was Bill Westfall, who served with the U.S. Marines for four years in Vietnam. After leaving the service, he became dedicated to law enforcement and graduated from the Federal Bureau of Investigation’s National Academy. Today, he serves as the president of The Gallagher-Westfall Group of Indiana, which provides leadership training for thousands of police officers every year.

Westfall began with a word of encouragement for Generation Z, who like their Millennial and Generation X elders are often targets of derision for being listless or entitled. He pointed to the younger generation’s service in Afghanistan and Iraq, both of America’s longest wars fought simultaneously, as evidence that there is no generational claim to honor and sacrifice.

Westfall told the story of Dough Hegdahl, who at the age of 20, was knocked overboard from the USS Canberra during in the Gulf of Tonkin and later taken into North Vietnamese custody. Westfall pointed out Hegdahl’s youth at the time, as well as his low rank compared to the other prisoners at what would become known as the “Hanoi Hilton.” However, Hegdahl possessed enough cunning to survive.

“He was smart enough to play dumb,” said Westfall.

Hegdahl presented himself as a simpleton, throwing off early suspicions of him being a spy or commando. Indeed, he pretended to be incapable even of reading or writing. His captors enrolled him in literacy lessons, hoping to use him as a vehicle for propaganda. This afforded him some leniency and privileges, which he then put to use in service to his country. With the help of other prisoners, Hegdahl memorized the names, capture dates and personal information of 256 prisoners, becoming a walking intelligence asset. When the Vietnamese government arranged for a prisoner release, Lieutenant Commander Richard Stratton ordered Hegdahl leave with two other men to spread word of what was happening in the prison, and inform relatives that their loved ones were alive.

Westfall said he often reflects on that story, and the importance of making the best of the hand one is dealt.

“Everything in life is a choice,” he said.

Westfall said the trait of bearing hardships with grace are not limited solely to the battlefield. He pointed to 17-year-old Blake Duttlinger, who suffered severe injuries in a farming accident last month, but is already back to school on his own power. Westfall presented Duttlinger with a challenge coin to honor his perseverance.

“These young men exist in every small town in the United States,” said Westfall.